Lisbon Trams of the Past

Above, left, clerestoried bogie tram 323 at Cais do Sodrť in summer 1991 in the livery of the Pingo Doce supermarket chain. Middle, a "caixote" tram at Pc. Comťrcio, 1984. Right, smartly painted tram 275 at Comťrcio in 1989.

Until the 1990s trams more than 80 years old were still operating on daily services in Lisbon but, since 1995, the fleet has been broadly reduced to two types - modern Siemens articulated trams and remodelled Standard Trams, also introduced into service in 1995. For details of modern tramway operations in Lisbon please see Part One of this webpage, here.

Largely because unlicensed rivals, notably Ripert and Eduardo Jorge, were making use of their 1435mm-gauge tracks, from 1888 Carris installed an almost unique 900mm gauge. Conversion work continued into the 1890s. (Only Linz in Austria has the same gauge today). After 1892, the main rival to Carris was the firm of Eduardo Jorge, with its mule-hauled trams, known as 'carros de chora'. After 1917 Jorge moved to suburban services and continued in business as a coach operator until being subsumed within the nationalized Rodoviária Nacional in 1976.

W.H. Koebel's book, Portugal:Its Land and People published in London by Archibald Constable in 1909 has an interesting account of the rivalry between Carris and Eduardo Jorge, pp.66-71. This includes the following...

"Of the public conveyances, the tramway system stands out first and foremost. ... It is a rather curious fact that so many of the Iberian races have, for some while past, been served with a system of these convenient vehicles, such as we ourselves have only recently commenced to adopt. 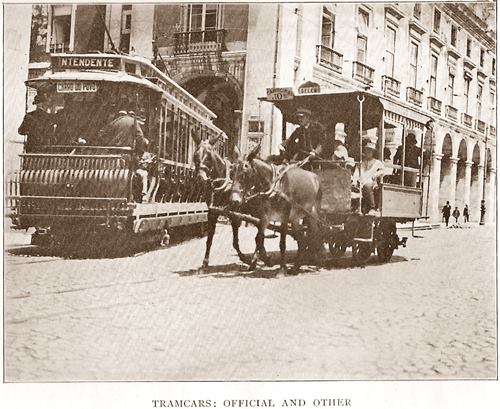 Right: Carris's electric trams competed with Eduardo Jorge's mule cars at the start of the 20th century, as pictured in Koebel's book of 1909 (details above). Here, Jorge's mule car (right) is heading for Belťm whilst a Carris "carro do povo" (workers' car) is heading into the city centre of Lisbon.

The efficiency of the Lisbon service, for one, is undeniable. Tramcars here are ubiquitous. Fearing apparently no gradient whatsoever, they are wont to preform mountaineering feats of no mean order... in perfect tranquility and confidence.

Not content with the exploitation of the main thoroughfares, the daring cars will branch off suddenly and plunge headlong into the complicated netweork of the eastern streets [Alfama]... The speed of the snake-like progress is amazing. Indeed, in order to witness an altogether unsuspected power of agility in the cumbrous modern tramcars, one need go no further than Lisbon.

A number of these cars have in tow a secondary carriage, rather smaller and less imposing in appearance, that is known as the carro do povo, the people's car. The fares of the first are strictly reasonable; but those of the second-class are yet cheaper, and the latter vehicle is patronised entirely by the peasants and poor folk of the town. There are occasions, Sundays and feast-days for instance, when no difference is made betweeen the charges of the two.

It is at such times that the innate modesty of the populace becomes evident. For the great majority, loth to to acknowledge their genuine claim to a seat in the first, insist on crowding themselves together in the second, as on ordinary days, frequently even if the car of superior status be almost empty.

But even the carro do povo is not the cheapest of all the vehicles that ply upon the tramway lines. A very short while spent in the capital will reveal the existence of a number of small vehicles constructed and painted in tramcar fashion, but very much in miniature. Upon their fronts they bear the regulation placards announcing the destination of each, but upon the side is the plain inscription 'Eduardo Jorge'

And Senhor Eduardo Jorge, if he exists in the flesh, is a very enterprising and astute person. One may watch one of these cars as it careers along, as a rule well-laden with pasengers, until it comes face to face with one of the electric ones, a giant by comparison... The mules are flogged to one side; the wheels of the small vehicle slip out of the track, and the conveyance swerves onto the roadway to circle round out of the way of the other and to recover its hold of the lines upon the further side. Meanwhile the other rumbles forward in a stately contempt that is only broken by the expostulations of the driver when the mule-car fails to yield its ground with sufficient promptness...

The small car is a frank pirate upon the rails. It is an institution that preys upon the tramway lines, sharing no expenses with the company for their upkeep. The scheme... is naturally resented by the responsible company. It took the matter to the law courts but was told... that if it chose to leave its rails lying about the streets it could not object to the wheels of other vehicles passing over them...

The company... resorted to a desperate measure and altered the gauge of its lines. Eduardo Jorge.. forthwith amended the width of his axle-bars in proportion and continued to run as before. And so he runs still, undefeated, with his jaunty little cars and their mules...

Yet Eduardo does not get off scot-free. He is recognised by the government to the extent of a tax on each vehicle that represents - would it be believed? - no less than one hundred pounds per annum. But Eduardo Jorge pays it cheerfully, and prospers".

The Historic Tram Fleets of Lisbon

Carris started operations on 17 November 1873 using the standard 1435mm gauge on a service (route #1) running every 15 minutes between the Santa Apolónia railway station and Santos, to the west of the city centre. Carris routes reached Belém in 1874, Algés (1878), Rossio (1878), Rato (1879), Poço do Bispo (1888), Lumiar, (1890) and both Benfica and Areeiro (1891). The original route #2 ran from Rato to Corpo Santo, with branches to Estrela and Príncipe Real. Rossio to Anjos, opened in 1881 was route #3. Most of the early horse-drawn trams were supplied by John Stephenson of New York and known as 'carros americanos'. A depot was built to house the fleet at Santo Amaro (1875) which today remains as the sole Carris tram shed. In that year 3,375,992 passengers were carried, a total which rose to 11,225,487 by 1898. From 1889-92 there was a brief experiment with steam trams. By August 1902 all of the mule-hauled fleet had been withdrawn, following the arrival of electric trams (see below). 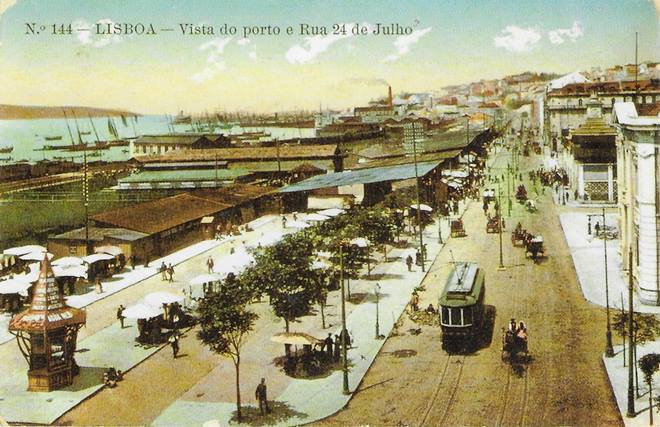 Above: This early 20th-century postcard shows an electric tram on the Avenida 24 de Julho. Note the track repair work going on next to the tram and that Portugal drove on the left until 1928.

Historically the evolution of the Lisbon tram can be divided into four main periods:

The term 'carros americanos' was also applied to the electric trams introduced up to 1914. Electrification was organised by the Lisbon Electric Tramway Co, based in London, founded in 1899. Unlike what happened in most of the rest of Europe, Portugal's American trams came directly to the country by ship from the United States, starting in January 1901, rather than being acquired from European agents. Brill of Philadelphia was the predominant supplier, producing both 4-wheel and 8-car vehicles for Lisbon.

The GEC 25hp GE59 motor was the norm for these vehicles. Many of these tramcars were still running into the 1990s, albeit obviously considerably overhauled and/or rebodied since their construction.