The Metropolitano de Lisboa,
The Metro do Sul do Tejo and
The Metro Ligeiro de Superfície

The following text describes, firstly, the Lisbon underground city metro system, then the metro system opposite Lisbon on the south bank of the Tagus (to which a separate page is dedicated here) and, finally, a proposed light Metro system which will encircle Lisbon.

A superb all-colour guide to the Lisbon metro is the publication Metros in Portugal, written by Christoph Groneck and translated by Robert Schwandl & Mark Davies. It was published in 2008, in Berlin, by Robert Schwandl Verlag and is liberally illustrated through its 144 pages (ISBN 978-3-936573-20-6). The text is in parallel columns of German and English. Despite its title it also has summary coverage of Portugal's tramways and suburban railways. It is thoroughly recommende and can be acquired in the UK from the excellent MDS Books.

The Metropolitano de Lisboa, or 'Metro', is the underground railway system which serves the Portuguese capital. It is a 750 volt third-rail system built to the European standard 1.435m gauge. Construction commenced on 7 August, 1955, six years after approval was granted, and the system opened on 29 December, 1959. At the time it was Europe's 14th underground system and the 25th to be built in the world. Built largely by the "cut and cover" method, it ran from Restauradores to Rotunda (now M. do Pombal), where it split into two, one line going to Entre Campos and the other to Sete Rios (now Jardim Zoológico). It carried 15.8 million passengers in its inaugural year of operation, by 1967 ridership topped 30 million and more than doubled to 70 million in 1972. By 2006, 184 million passengers were being carried.

The Metro system runs (2012) on a network comprising four lines. These have a confusing array of names being described on Metro signage as Blue, Yellow, Green and Red, or Gaivota (Seagull line), Caravela (Caravel line), Girassol (Sunflower line), and Oriente (East line) respectively, whilst the operating company's literature and web-site also refers to them sometimes as lines A (blue), B (yellow), C (green) and D (red). The Metropolitano de Lisboa's own Web Page provides an updated map of the system.

History of the Network's Expansion

In 1963 the original network was expanded southward one stop to Rossio; it was then extended northwards, reaching Anjos (1966) and Alvalade (1972). Subsequent plans to extend eastwards along the north bank of the Tagus river were, however, abandoned at this stage.

Indeed, rather than extend the network further, it was decided to address the problem that all of the stations, except for those built for the 1972 extension project and those at Rossio, Rotunda, Entre Campos and Sete Rios, were only 40 metres long so could only accommodate two-car train sets. When four-car units were introduced, trains either stopped with two carriages still in the tunnel or ran as expresses and made stops only at the four-car-length stations. It took until 1982 to extend all of the 40 metre stations to 105 metres, which allowed for six car-sets to serve them but the stations with 70-metre platforms were left unextended at this stage.

Following this work, the emphasis returned to expanding the network. The western branch was extended from Sete Rios to Colégio Militar/Luz and the eastern line to Cidade Universitária from Entercampos, all of the new stations having 105 metre platforms, which opened in 1988. Next, the two arms of the system were joined by each being extended to Campo Grande (1993) which is an above-ground station with four lines. At this stage each line terminated there, without any through running. A new Metro depot was also provided, nearby, at Calvanas.

What was, crudely, a figure-six shape was then split into a U-shape by the line between Rotunda and Campo Grande being separated and becoming the Yellow Line; the rest of the network thus became a U-shape Blue Line, running south from Campo Grande via the city centre and back up north to Colégio Militar/Luz. This separation took place in 1995 and that year the Rotunda platforms were extended to 105m length as were those at Sete Rios. 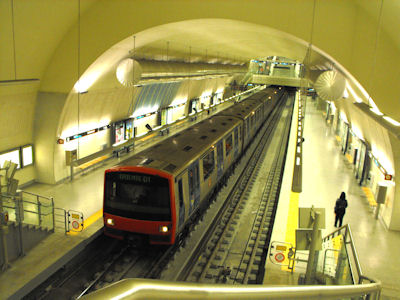 In 1997 both the Blue and Yellow lines were extended; the latter by one stop from Rotunda to Rato; the former from Colégio Militar/Luz northwards to Pontinha, where a new depot opened to replace the original one at sete Rios, which is now the site of Lisbon's main coach station. Sadly, that year, on 19 October 1997, a fire at Alameda station killed two people at a time when it was closed to the public for works associated with Red Line development. One of the fatalities was of a Metro worker at Areeiro who was overcome by fumes which came up the tunnel.

Major changes occurred in 1998 when the impressive Baixa-Chiado station was opened. This has an entrance in the city centre (Baixa) as well as one at a much higher level in the Chiado district, linked by a series of escalators. As a consequence of this, a Green Line was created, being the former section of the Blue Line running from Campo Grande via Alvalde, Rossio and Baixa-Chiado to its new terminus at Cais do Sodré, adjacent to the Cascais Line railway of CP, the tram route (15) and the ferry terminal.

Meanwhile, Lisbon was preparing to be the location of Expo 98 so a new Red Line was constructed to the Expo site at Oriente in the north east of the city. This started from the Green Line at Alameda. Oriente was also provided with a magnificent new CP main line station linked to the Metro by escalators, lifts and stairs. It was in May, 1998 that the Oriente line was inaugurated, though some of the intermediate stations opened later than the terminal station, e.g. Cabo Ruivo (opened July 1998), Olivais (November 1998).

Since then, further extensions have been opened, with the Telheiras extension from Campo Grande on 1 November 2002 followed in March 2004 by the Yellow line, which was doubled in length to Odivelas from Campo Grande. Next, in May 2004, Amadora Este became the terminus of the Blue Line, beyond Pontinha. An extension to the airport opened in 2012.

The remaining Green Line stations (except Areeiro and Arroios) have been extended from 70m to 105m to allow six-car operation. Finally in December 2007 the long delayed extension of the Blue Line via Terreiro do Paço to Santa Apolónia main-line station was inaugurated. Plans exist to extend the Red Line further west to Campolide. An extension from Amadora Este on the Blue Line to link with the CP Sintra Line at Reboleira was envisaged with 2011 as a target date for completion, a goal only met several years later. Three new stations were also projected at Atalaia, Amadora-Centro e Hospital Amadora-Sintra, an extension of 2,5 km, costing some €240 millions but this has not materialised. Other major extensions are planned, not least an extension of the Yellow Line to link with the Cascais railway line at Alcântara.

Nevertheless, a significant number of new stations have been created in recent years, with the river-front link from Baixa Chiado via Terreiro do Paço to the mainline Santa Apolónia station opening on 19 December 2007, more than five years late due to tunnelling problems at the waterfront caused by water ingress. This extension provides a rapid connection, via a change at Baixa-Chiado, between the Cascais railway line and the bustling Praça do Comércio.

After years of the waterfront being scarred by the protracted works on the Terreiro do Paço underground station, the area was further blighted (c2009) as the Pç. Comércio was dug up for works on an old sewer and to underpin the eastern tower by the waterfront, which had settled over the years. Although Pç. Comércio itself has now been largely (but not completely - 2016) tidied up, the route between there and Cais do Sodré, to the west, was also affected by major work to upgrade the waterfront at Ribeira das Naus (2012). And to the east, the closure of the iconic Sul e Sueste ferry terminal has left something of an eyesore in the form of the redundant building.

Further extensions have seen the lengthening, to the west, of the Red Line from Alameda via Saldanha to São Sebastião, which opened on 29 August 2009 and this provides interchanges with the Yellow and Blue Lines respectively. It is therefore now possible to travel to Oriente from north-west Lisbon without having to journey via the city centre. An extension at the other end of the Red Line via Moscavide reached Lisbon airport in July 2012.

As of 2013 the Metro website listed the following planned developments:

Extension of Blue Line from Amadora Este to Reboleira, which lies on the CP railway line to Benfica. This has now been accomplished. The work included the estension of Areeiro and Arroios metro stations to platforms of 105 metres' length, allowing the use of six-car trains. It was also planned to refurbish the stations at Anjos e Intendente. On completion the network will comprise about 44.2km in lengthwith 56 stations.

In 2017 it was announced that the Yellow Line would be extended to Cais do Sodre from Rato via new stops at Estrela and Santos. For some two years during construction, the tram routes 15 and 18 would be moved from the coastal alignment from Cais do Sodre towards Belem and would operate, instead, more inland on the current route 25 alignment from Corpo Santo to Santos. 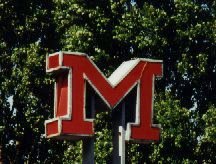