Above: The Ponte 25 de Abril seen from the castle ramparts.

The River Tagus (Rio Tejo) at Lisbon is approximately 2km wide and until 1966 there was no bridge across from the city to the southern bank. Until then the lowest fixed link on the river was at Vila Franca de Xira, some 32 km. to the north of the city, where the General Carmona road bridge had been built in the 1930s.

The current suspension bridge opened in 1966 at a cost of 32 million US dollars. Originally, it was named the Ponte Salazar (after the then prime minister/dictator of Portugal, António de Oliveira Salazar). This bridge was renamed the 25th April Bridge (Ponte 25 de Abril) after the 1974 Portuguese Revolution, so as to remove any reference to the former dictator. This suspension bridge is often likened to the Golden Gate Bridge in San Francisco, USA, and, indeed, it too was constructed under North American management, beginning in 1962. Indeed, the American Society of Civil Engineers says that "Like its sister bridge, the Golden Gate in San Francisco, the Tagus River Bridge is located in an area with a long history of earthquakes" and seismic data had to be taken into account in its construction.

The bridge is 2.278km long between its anchorages with the main span being 1.013km long. The bridge originally opened (1966) as a four lane road bridge with a central barrier but the barrier was removed in 1990 to accommodate a fifth lane. The bridge leaves western Lisbon at high level above the Alcântara valley and makes landfall at Almada on the southern bank of the river, adjacent to the Cristo Rei monument (a smaller variant of the Brazilian original in Rio de Janeiro). The bridge is not directly accessible at river-level at Alcântara, as it crosses the area on tall concrete pillars. Road vehicles must head to the north west of the city to gain access to the high-level toll-road across the bridge. The bridge, when built, had the longest central span of any European suspension bridge. However, both the more recent Humber Bridge (UK) and Bosphorus Bridge are amongst those that are now longer.

The bridge crosses the Tagus at a height of 70m. and its foundations on the Lisbon side, at 79m. deep into basalt rock, were also a world record at the time of their sinking. By 1996 the bridge was absorbing, with increasing difficulty, 137,000 vehicles a day, carrying 50,134,000 passengers per annum. Still, in 2005, it is common to see lengthy queues on either side and across the bridge, despite the relief afforded by the construction of the Vasco da Gama road bridge further upstream in the late 1990s (see below).

The bridge itself provides good views over Lisbon, of the Lisbon docks and of the Cristo Rei (Christ the King) monument at Almada, which commemorates Portugal's survival of World War II without the country's direct involvement. Down river can also be clearly seen the Torre de Belém.

The bridge can be seen from the river front in central Lisbon as well as from the elevated Castelo de S. Jorge. The ferry boat services to Cacilhas, Trafaria and Porto Brandão provide an even closer perspective. The river bank at Alcântara has recently been upgraded by gardens and walkways which allow the pedestrian to get a good idea of the immensity of the structure, as does the perspective from the Cascais railway line. The pillars of the bridge include some sited within the Carris tram depot at Santo Amaro.

From the outset the bridge was designed to carry a road and a lower railway deck and it would have been the longest such bridge had this been implemented at construction. However, it was only in summer 1999 that the lower railway deck was ready for use after major preparatory works which included the fitting of additional cables and the widening of the roadway to six lanes, as well as re-painting of the bridge. The "retro-fit" of the railway track was the largest such project undertaken on a bridge in the world. The rail deck is below the road carriageway and was completed by hauling construction materials up to it, to avoid disruption of road traffic. The two-track bridge crossing now links central Lisbon, via Roma/Areeiro, Entrecampos, Stee Rios and Campolide stations to Setúbal and the south of Portugal. Previously, all rail passengers to the southern part of Portugal, (the Alentejo and Algarve), had to get to the Sul e Sueste ferry terminal, off the Praça do Comércio. Here passengers had to take a ferry boat to Barreiro, a journey of half an hour (but recently reduced in time by the introduction of catamarans) to the ferry terminal at Barreiro, which lies adjacent to the railway station on the south bank of the Tagus. The ferry service is still well used as the full rail connection is not yet complete. 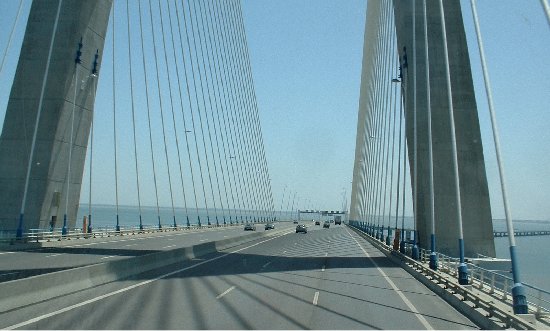 Above: The Vasco da Gama bridge, as seen when heading south (2005).

This magnificent structure was opened on 29 March 1998. It is an amazing 17.185km long and connects the north Lisbon suburb of Sacavém to the south bank of the Tagus near Montijo. The bridge includes viaducts of 12.345km, the rest of its length being approach roads. Up to 3,300 workers built the bridge between February 1995 and March 1998. It is solely a road bridge, with a striking suspended section, 47m high, near the Lisbon side which allows ships to pass under it. There is an excellent Web Page, in English and Portuguese describing the structure in great detail. The bridge was built with private sector funding.

The bridge is named after the famous maritime explorer, Vasco da Gama. In 1498 Vasco da Gama discovered the sea route to the Indies around the Cape of Good Hope and in the 500th anniversary year of that exploit, the bridge was most appropriately named after him. Gama's voyage began at Belém, only a few kilometres further down the river than the new bridge. The structure is perhaps best observed from the cable- cars of Expo 98. 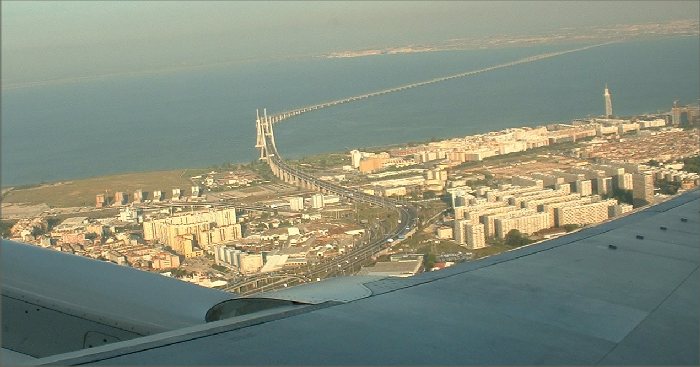 Above: A view of the Vasco da Gama bridge taken from an aircraft taking off from Lisbon airport in May, 2007.

L to R: Two aerial views: left, the Águas Livres aqueduct viewed from the air, runs from the bottom left of the above picture ; right, the aqueduct seen near Campolide- click for enlargements; the aqueduct at Campolide.

This magnificent aqueduct, built from 1732, also served as a pedestrian walkway until closed in the nineteenth century following a series of crimes committed on its lofty structure. The aqueduct runs from Belas, north of Lisbon, via 35 arches across the Alcântara valley to the Mãe das Águas reservoir (5500 cubic metres), near the Largo do Rato in western Lisbon. 14 of the arches are ogival, the rest are are rounded. The aqueduct began operating in 1748 and today includes 109 arches across the valley, with the tallest arch being 66m. high and 29m wide. It remained in use from 1748 until 1967 and in all the aqueduct and its branches total 58,135 metres in length. The aqueduct can be closely observed from Campolide railway station on the Azambuja Line.

Formal approval was given in July, 2000 to a third cross-Tagus bridge for Lisbon. This bridge had been announced in mid-December 1999 and would be a second rail crossing of the Tagus. It would be constructed to carry new lines between the northern Lisbon suburb of Chelas and the southern bank of the Tagus at Barreiro. This would be a further threat to the viability of the Lisbon ferry crossing from Sul e Sueste to Barreiro. The intention was that standard European-gauge lines would provide a high-speed link across Spain and Portugal and that these services would use Chelas and Santa Apolónia stations before crossing the Tagus towards the Algarve. In summer 2000 it was announced that the bridge would also carry road traffic. However, in June 2001 Lusoponte, operators of both existing Tagus bridges, reported that this third crossing would not be viable. Lusoponte favoured a road tunnel west of the Ponte 25 de Abril between Algés and Trafaria; the company has a concession for any future road crossings of the river.

But by January 2008, it was announced that Lisbon's new airport would be at Alcochete and that the new Chelas to Barreiro bridge would provide the rail link to the new facility. By then it was envisaged that the bridge would carry a six-lane motorway, two 1435mm tracks for high speed trains and two lines of 1668mm for other routes. A Lisbon to Setúbal service would operate via the new bridge and the existing Pinhal Novo to Barreiro line with a journey time of just 25 minutes - much quicker than the Fertagus route between the cities. The new bridge will be 10km long with its approaches.

However, the new airport itself looks an unlikely venture; indeed the current airport has expansion plans, so the construction of this projected bridge seems remote.