Lisbon has three working street funiculars and one street elevator which allow its citizens and visitors to move to and from its hilly districts more easily. All are operated by Carris, the Lisbon city transport undertaking. A new elevator also opened in 2000 at Almada, on the opposite bank of the Tagus (see below). Viva Viagem "ML" tickets (i.e. ones bought at Metro stations, for example) are valid on the funiculars. 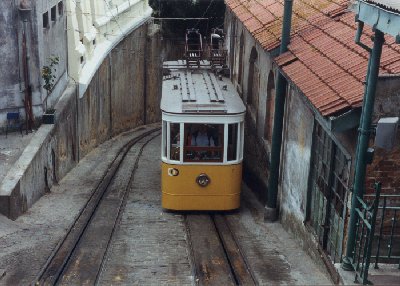 
The Lavra funicular was the first street funicular in the world. It opened on 19 April 1884 and carried 3,000 people, free of charge, on that day alone. Originally water-powered, it was converted to electricity in 1915. It runs from the eastern side of the Avenida da Liberdade at a 25% gradient for 180 metres to the Torel district. Originally it operated on a water counter-weight system, but was subsequently electrified. Hours of operation (2010) are 0700-2100, every day except Sunday, when the opening time is 0900. To reach the bottom of the funicular, turn right off the Avenida da Liberdade, whilst heading north, into the Largo da Anunciada. This turning is slightly further up the Avenida than the main tourist office in Restauradores, on the opposite side of the road. The Lavra funicular is to be found about 100 yards along the Largo da Anunciada. The route was closed from 21 June to 5 July, 2006 following an accident but service was restored soon afterwards.

The vehicles are parked overnight towards the top end of the route and their exposed position has sadly left them prey to graffiti "artists" who have ruined their appearance.

The Glória funicular opened on 24 October, 1885, on the west side of the Avenida da Liberdade, connecting Restauradores with the Bairro Alto. Excellent views of the city and castle are to be had from the gardens which lie immediately to the right of the top of the route. Just across the road, slightly to the right, at Rua de S. Pedro de Alcântara, nos.39-49, lise the Instituto do Vinho do Porto, where a vast range of port-wines may be tasted and purchased in the sumptuous surroundings of the Palácio Ludovice (1749). The Glória is the busiest funicular in Lisbon and also the most accessible for tourists as it lies next door to the main tourist information office in the Palácio Foz. It is 265 metres long and has an average gradient of 18%.

Operating hours are approx. 0700-0055 every day. Sadly, the cars are now defaced by graffiti. In 2006-08, the Glória funicular was out of action whilst remedial works took place on the Rossio railway tunnel which runs beneath the funicular track. The closure started from 17 April 2006, supposedly for six months but it was still closed 18 months later. However, it is now fully operative again.

As with the Lavra and Bica funiculars, both Glória vehicles are badly affected by graffiti on their exteriors. 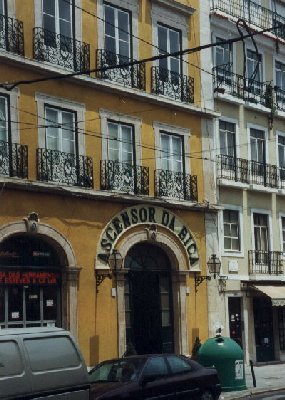 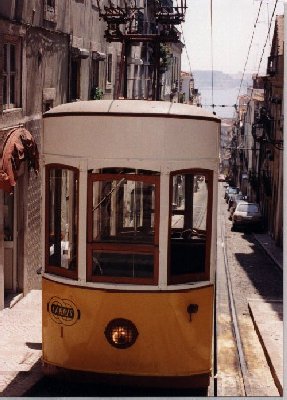 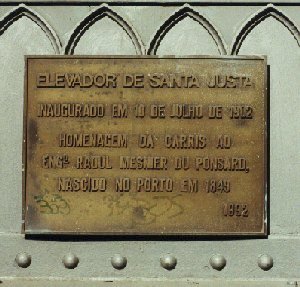 L to R: The entrance to the Bica funicular in Rua S. Paulo and one of the two passenger cars; the commemorative plaque on the base of the Santa Justa elevator.

The Bica funicular opened on 28 June, 1892 and is the only stepped street funicular in the city. It climbs the Rua da Bica for 245 metres from the Rua S. Paulo, near Santos, to the Calhariz district. Its average gradient is 20% but is much steeper at the lower end (S.Paulo). From the street, the funicular is concealed by a building but this is clearly lettered 'Ascensor da Bica'. Originally water-powered, steam-power was introduced in 1896, followed by electricity from 1914. The service operates the same hours as the Lavra facility (see above). Tram #28 runs past the top end and tram #25 passes the bottom end of the Bica route. The Bica funicular was closed from 8-22 May 2000 for refurbishment works and again in June/July 2012 but has remained fully operational between such overhauls. 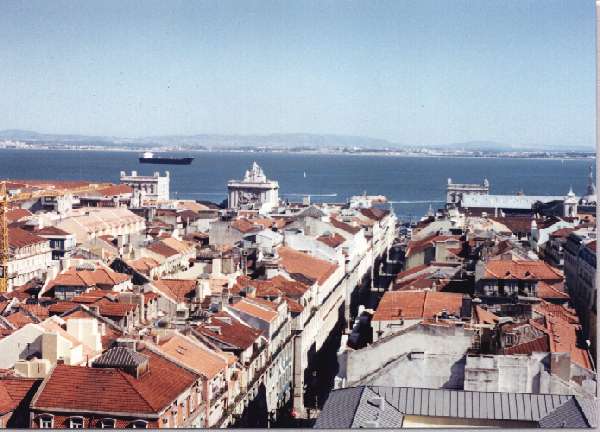 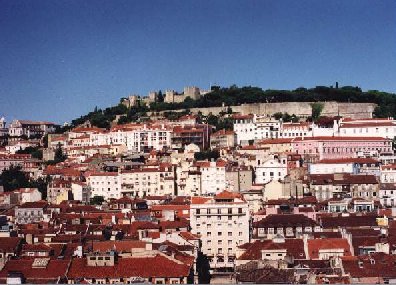 Views from the top of the Santa Justa elevator, (left) towards the Tagus and right, towards the Castelo de São Jorge. Click to enlarge. 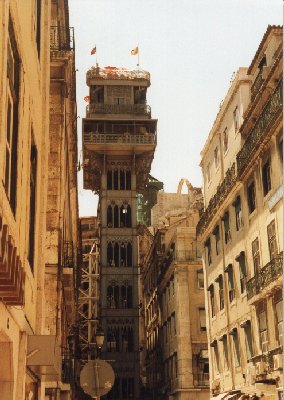