Carris-The Company and Its Development

Rightt: The old Carris logo as worn by the Glória funicular in 1998.

Carris is the main public transport undertaking of Lisbon, the Portuguese capital. The company has its own excellent Web site in both Portuguese and English. Carris was founded in 1872 in Rio de Janeiro, Brazil. Its first horse-drawn trams, known as 'americanos', ran on 17 November, 1873 between Sta Apolónia railway station, a mile east of the city centre and Santos, a similar distance to the west along the river front.

Its electric tram services were introduced on 31 August, 1901 on a route to Ribamar (Algés) from Cais do Sodré 9now essentially the modern tram-route 15). Although five buses were acquired in 1912, these were withdrawn in 1915. Buses did not make a return to Carris's fleet until 9 April, 1944, although six vehicles had been acquired in 1940. 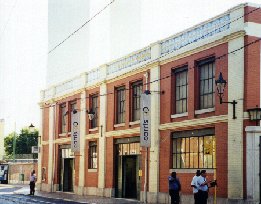 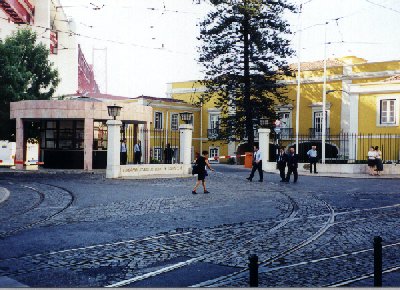 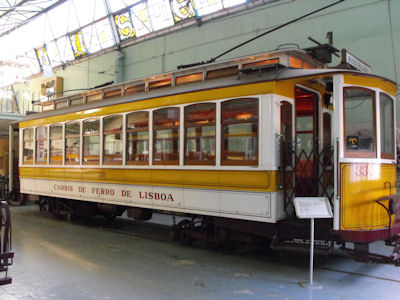 
Carris's headquarters (above, left) are in the Rua 1 de Maio, no.101, at Santo Amaro which lies on tram route 15, about 15/20 minutes' ride from Praça da Figueira. At Santo Amaro, too, is its tram shed and museum, situated almost directly beneath the enormous Ponte 25 de Abril suspension bridge across the River Tagus. Its other tram depot, Arco do Cego, on the Avenida Duque de Ávila, was vacated and converted into Lisbon's main coach station but that facility has now moved to Sete Rios; for details, see the Lisbon Suburban Bus and Coach page.

At one time, Arco do Cego housed the entire fleet with Santo Amaro being chiefly a repair depot. Arco do Cego has now been turned into a covered car park with an adjacent garden. Another former depot, at Amoreiras, opened in 1937 and closed in 1981, is now the site of a major shopping centre. New Carris bus depots were opened at Pontinha (1975) and Musgueira (1981), whilst a large complex was opened by the President of Portugal at Miraflores in June 1983.