Above, the cruiseship "Crystal Serenity" heads downstream in May, 2007, as a ferry from Cacilhas comes in to the Cais do Sodré landing stage.

Lisbon owes its importance to its natural location in a natural harbour on the River Tagus (Rio Tejo), about 10km from its mouth with the Atlantic Ocean. Although the original inlet is now filled in by the Baixa area of central Lisbon, the city still has extensive docks. These occupy the Alcântara area to the west of Lisbon and the riverside to the east between the centre of the city near Santa Apolónia station and Parque das Nações, (the Expo 98 location), which itself occupies the former docks at Olivais. 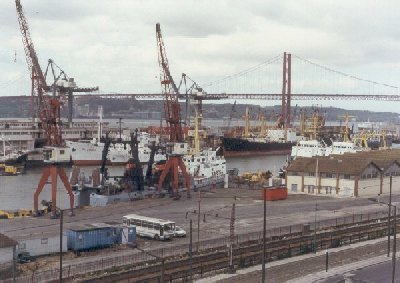 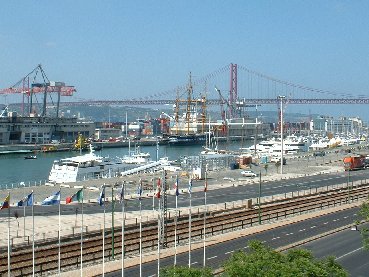 The transformation of Alcântara docks with the Ponte 25 de Abril (bridge) in the background and the railway line to Cascais in the foreground can be seen with left a 1990s' view of commercial activity and, right, a 2003 picture with no foreground cranes and the dock now full of leisure craft including the D. Fernando e Glória 'tall-ship' (of which more is below...).

An intensive service of river ferries used to operate from the Cais da Alfãndega (or Terreiro do Paço), adjacent to the Praça do Comércio, and the next-door Estaçăo do Sul e Sueste in central Lisbon, as well as from Cais do Sodré and Belém. However, from summer, 2000, the Cacilhas ferry service was supposedly only "temporarily" transferred from Alfãndega to Cais do Sodré but remains at the latter location where a large permanent terminal has now been built - see the Ferries Page for details.

L to R: The liner 'Astra' in Alcântara dock, 1999; Not all the ships which enter the Tagus leave again; the wreck of the MV Tollan, a British cargo ship which sank near the Pç do Comércio on January 11th, 1980. The former Lisnave shipyards are visible across the river; a closer picture of the same Lisnave yards, adjacent to the Cacilhas ferry terminal.


Across the river from Lisbon was the site of the major ship repair/building yards of the Lisnave (Esatleiros Navais de Lisboa) company, whose forerunner was founded in Lisbon in 1937. It moved across to the south bank of the Tagus c1960. By the late 1990s the main shipbuilding facility at Margueira (Almada) had been closed and supplanted by the Setenave facility at Mitrena (near Setúbal), taking his heavy industry further away from large centres of population. The company was, at one time, the largest shipbuilder in Europe. On the Lisbon side, the Alcântara docks have undergone transformation as former dock buildings are converted into nightclubs and bars but cruise liners also still use here although most now dock further upriver near Santa Apolonia (see below). 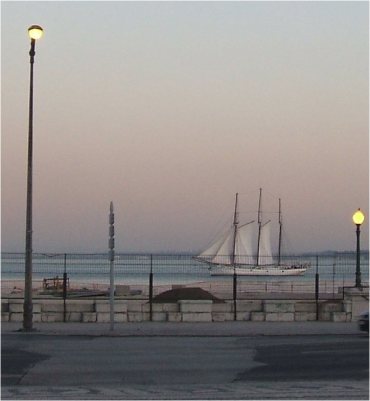 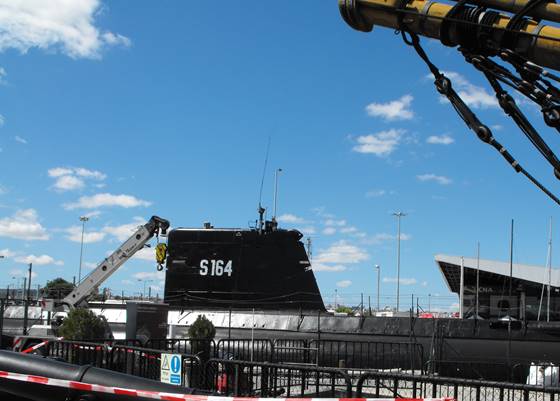 Above: A sailing ship is seen passing the Praça do Comércio one evening in May 2007; Submarine S164 at Cacilhas. 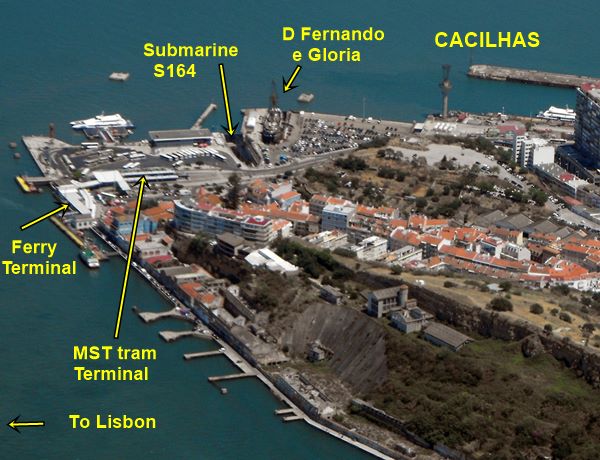 The 'D. Fernando e Glória' can now be visited in its dry dock adjacent to the ferry terminal at Cacilhas, which is easily reached by ferry from Cais do Sodré. Next to it, in another dry dock is a retired Portuguese submarine (S164), which has also been restored.

A number of traditional boats are on show in the Museu de Marinha at Belém. Several of the local Town Councils in the towns on the south bank of the Tagus also maintain traditional river craft which, in some cases, may be hired. These include:

An excellent, illustrated site, is Ian Boyle's which covers a visit to Lisbon by the cruise ships Aurora and Grand Princess
Copyright 2016: ©