Cesário Verde was Portugal's major poet of the nineteenth-century. He was born on 25 February, 1855 (the feast-day of São Cesário), and died of tuberculosis on 19 July, 1886. He lived all his life in Lisbon, although part of each year was spent at his family's estate at Linda-a-Pastora, some 15km away, to the west. Part of the Verde family lands were acquired from them by the state to build the Forte do Alto de Caxias. 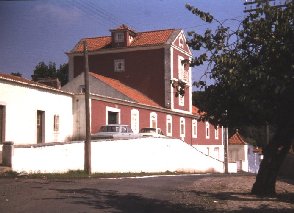 Left to right: The Verdes' house at Linda-a-Pastora- the premises suffered a fire in the early twentieth century which destroyed the house's library; the title-page of the first edition of the Livro de Cesário Verde,1887; statue to Cesário in Lisbon's Rua de Dona Estefânia.

Cesário's father was also the owner of an ironmongery business with premises at numbers 2 to 8 of the Rua dos Fanqueiros, on the corner of that street and the Rua da Alfândega, only yards from the Praça do Comércio in central Lisbon. Cesário, as the eldest son of the family, ran the business for a number of years prior to his early death. His poetic output was limited by his commercial responsibilities and during his lifetime he earned little acclamation for his poetry. On his death at Paįos do Lumiar, in the northern suburbs of Lisbon, on 19 July 1886, his poetry remained scattered amongst various newspapers of Lisbon and Oporto, and in a number of literary journals.

The other Lisbon addresses at which Cesário lived included:

In 1887, Cesário's close friend, António José da Silva Pinto, published a limited edition of two hundred copies of Verde's poetry under the title O livro de Cesário Verde, (Lisboa: Typographia Elzeveriana). This compilation included only twenty-two of the forty known works of the poet. The edition also included a number of textual alterations, deletions, additions and changes of title. The poems were also arranged in a non-chronological sequence, divided into two sections entitled Crise romanesca and Naturais, comprising six and sixteen poems respectively. For decades the Livro was accepted as the authoritative and complete works of Cesário Verde. Work by Luís Amaro de Oliveira, Pedro da Silveira and, later, Joel Serrão located a number of other extant poems and variants of those published in the Livro. These appeared in various editions of Serrão's Obra completa de Cesário Verde.

Left to right: The Verde ironmonger's shop, which became a bank, and which stands at the corner of the Rua dos Fanqueiros and the Rua da Alfândega, in central Lisbon; Cesário Verde's grave (July 1998) in Rua 7 of the Prazeres cemetery, in western Lisbon; the epitaph on Cesário's tomb. (This is easily reached by tram 28 or bus 774 from central Lisbon; both terminate at the cemetery gates).

The Need for a New Edition

Even Serrão's editions in the 1960s to 1980s failed to challenge the dubious authority of the Livro fully. Although they did present the variant readings of the texts, Serrão's editions still maintained the Crise and Naturais dichotemy and gave primacy to versions of the poems produced in Silva Pinto's edition of 1887 rather than those known to have been produced by the poet himself. Eventually, in 1988 Serrão moved some way to rectifying the problems of the Livro by reordering his texts in a more truly chronological sequence. Nevertheless, an edition is still awaited of Verde's poetry which both accords with texts known to have been produced by the poet, rather than altered by Silva Pinto, and which prints the poems inthe correct chronological sequence.

In 1999 Ângela Marques produced an edition which was by far the nearest to this ideal in her Cesário Verde: obra poética e epistolografia, (Porto: Lello, ISBN 972-48-1767-9).

A so-called "texto definitivo" produced by Ricardo Daunt in Brazil in 2013 (based on his 2012 thesis) does not merit this self-description. It purports to produce the poems published in Cesário's lifetime, in chronological order, which is a laudable goal. But Daunt has arranged the poems which were not published in Verde's lifetime thematically by his own conjecture as to where they fit in the chronology. What is even more odd, although arranging the poems published in Cesário's lifetime in chronological order, he bizarrely uses the posthumous poem titles for those works culled from the 1887 Livro, for which we have zero evidence that these titles were the poet's rather than the editor, Silva Pinto's.

For instance, Daunt prints 22 stanzas which he has entitled "Setentrional" rather than "Cantos da tristeza", which was the title under which this longer version of the poem appeared during the poet's lifetime. "Setentrional" was a title only found in the posthumous Livro where it had only 13 stanzas.

Another illustration of inconsistency is that he also omits the original over-arching title, "Fantasias do impossivel", from the three poems that originally appeared under that name. And he inserts Humilhaįões into the known 1874 publications with no justification other than thematic conjecture. The work is entitled Obra poético integral de Cesário Verde, 1855-86: texto definitivo, Lisboa: Dinalivro, 2013.

The links below will be restored in the near future... 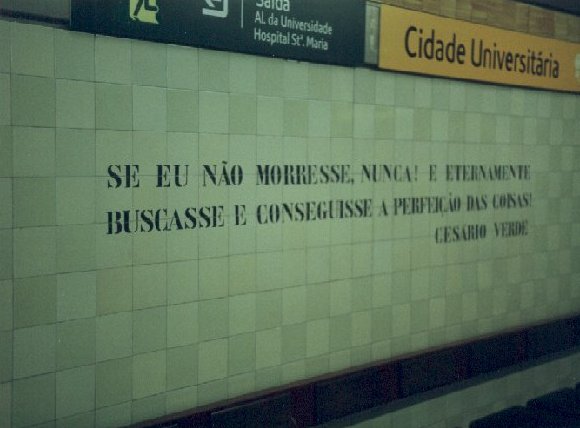 L to R: One of a two-stamp set issued in 1957 to commemorate, belatedly, the centenary of the poet's death in 1955; Cidade Universitária station bears this quotation in ceramic tiles on its walls; another Metro station homage to the poet.
Thanks to acknowledgements of his importance by such major poets as Fernando Pessoa and Mário de Sá-Carneiro, aswell as the accessibility provided by the editions of Serrão, Cesário is today accepted as Portugal's major poet of the late nineteenth century. A bronze bust of Cesário is to be found in the Rua D. Estefânia, whilst his grave, in Lisbon's Prazeres cemetery had a commemorative device attached to it in the early 1990s. He was also honoured by appearing on two Portuguese postage stamps in 1957. There is also a street named after him in Lisbon, although it has no connections with the poet's life.

1. An excellent source of information on countless Portuguese authors is the Projecto Vercial site.
2. A number of Verde's poems can be found on the Internet.
3. The Portuguese National Library holds some archive material relating to thepoet. This material includes the manuscript of Verde's longest and last published poem,'Nos' of 1884.
4. Information on Cesário and countless other Portuguese writers is to be found here, which also has links to other literary sites.