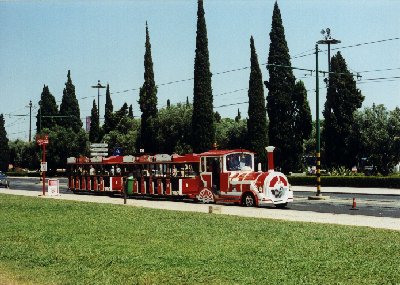 The Museu de Marinha lies in the Praça do Império, at Belém (tel:351/1/3620010) and occupies the north and west wings of the Jerónimos monastery. Strictly speaking its name translates as the Navy Museum but its contents do include the history of commercial vessels as well. It can be reached by alighting from the no.15 tram from central Lisbon at the stop for the Centro Cultural de Belém (Belém Cultural Centre). The Belém Cultural Centre itself is well worth a visit, not least for the fine view from its cafeteria's roof terrace which looks out towards the Tagus, across the railway line to Cascais. Alternatively, the Museu can be reached by train; it lies about ten minutes' walk, to the west, from Belém station which is on the Cascais Line, which starts at Cais do Sodré. The Museu de Marinha is open from 1000 till 1700 (1800 in summer), but is closed on Mondays and public holidays.

The Museu de Marinha was founded by King Luís on 22 July,1863 and was originally housed in the Naval School in Lisbon. A major fire destroyed most of its collection of ship models in 1916. From 1948-62 the Museum was housed at Laranjeiras, in north west Lisbon, in the palace of the Count of Farrobo. On 15 August 1962 the collections moved to their present location, to which has been added a modern pavilion filled with the museum's larger exhibits. Between this extension and the main collections, under a covered walkway, lies the Calouste Gulbenkian planetarium, which is also open to the public.

L to R: The Museu de Marinha's open-air section and the Gulbenkian Planetarium; the Royal brig of 1780; the Fairey seaplane in which Gago Coutinho and Sacadura Cabral completed the first crossing of the South Atlantic, to Brazil, 1922.

The present site of the museum is close to the chapel of Our Lady of Belem in which Vasco da Gama prayed before undertaking his historic voyage to India in 1497. The Museu de Marinha has a café, bookshop and produces an excellent colour guide booklet, entitled Museu de Marinha: Visitor's Guide.

The Museum has some 17,000 items and an extensive archive which includes 30,000 photographs. Its permanent display comprises about 2,500 items. These include magnificent collections of ship models covering every era from the 15th and 16th-century Voyages of Discovery to modern super-tankers.

The main part of the Museum is displayed in themed rooms, many of which are themselves architecturally striking and hung with oil paintings of explorers and historical events. In the entrance hall is a huge planisphere depicting the Portuguese Voyages of Discovery from the 15th century onwards. Amongst the exhibition rooms are ones dedicated to the Orient, Pleasure Craft, The Merchant Navy, Shipbuilding, The Discoveries, The 18th Century and The 19th/20th Centuries. In the Henrique Maufroy de Seixas Room is Seixas's collection of models, photographs, books and drawings related to maritime history. There is also a River Traffic Room, which includes models of traditional river craft, and a Deep-Sea Fishing Room which commemorates Portuguese exploits off Newfoundland and Greenland. Related to this last-named room is The Fishing Fleet Room but, perhaps, one of the most memorable rooms is that housing the sumptuous royal quarters of the former royal yacht, Amélia. The 1370 ton yacht was used by Portuguese royalty from 1887 until the proclamation of the Portuguese Republic in 1910. Indeed, the yacht carried members of the Portuguese royal family to exile, via Gibraltar. After service as a hydrographic vessel, the yacht was decommissioned in 1938. King Carlos and Queen Amélia's quarters were preserved and re-erected here in the Museum.


The pavilion extension contains a number of boats and royal barges, of which one of the most striking is the royal brig built for Queen Maria I in 1780. This was propelled by 78 oarsmen and carried such historical figures as Edward VII and Elizabeth II of England, the latter in 1957. Other famous passengers included Kaiser Wilhelm II of Germany and King Albert I of Belgium. Sirius, Also displayed are regional craft of northern Portugal, the Azores and of fishing villages such as Nazaré. A major exhibit is the Fairey 17 seaplane, Santa Cruz , in which Sacadura Cabral and Gago Coutinho completed their historic flight from Belém to Rio de Janeiro in 1922, a distance of 4527 miles, which required 62 hours 26 minutes of flying time and the use of three separate aircraft, as two were lost en route.


The Museu de Marinha also has its own Web site. To get between the various sights of Belém you can use the Comboio de Belém, a road-train which links the tourist highspots for a very reasonable charge of 500 escudos. Its starting point is the Jerónimos monastery but various stops are located along the route.

Other museums (most of which are closed on Mondays) which are well worth a visit include: