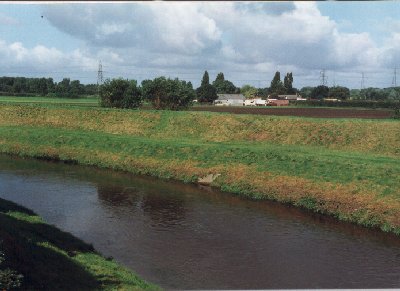 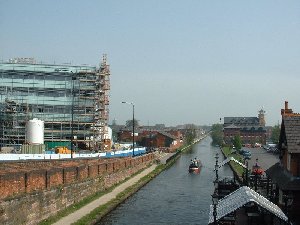 Left to right: The River Mersey, viewed from Crossford Bridge on the border with Stretford, looking west; The Bridgewater Canal looking north with the new Civic Centre at the time of its construction (2003).
There are two parts to this Web Page

Located five minutes from Sale Station, this park was opened on 30 June, 1900. It takes its name from Mrs Worthington, of Sale Lodge, whose money created the park. It occupies 16.5 acres and when opened boasted a bandstand and ornamental lake. The base part of the bandstand remains. A large stone lion which adorned the Park for decades can still be seen in Sale Children's Library, where it is now kept to protect it from vandalism.

Walton Park is situated adjacent to the Bridgewater Canal, near Brooklands station. It offers tennis, putting, crown-green bowling and children's playgrounds. A miniature railway runs on Sundays. There is also the Trafford Rowing Club boathouse here, located on the site of a former grain store serviced from the adjacent canal. The University of Manchester also has a rowing club house further north from Walton Park, near Dane Road Station.

Ashton Park lies between Grosvenor Road and Glebelands Road in Ashton-on-Mersey. It offers bowling and football facilities, as well as a children's playground.

Built on Broad Road in the early 1970s on the site of Sale Baths, it provides a wide range of facilities including two swimming pools, gymnasia and table-tennis. 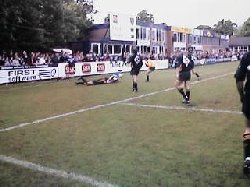 Trafford Football Club plays at Shawe View, near Chassen Road Station, in Flixton, whilst Flixton FC play at Valley Road. Amateur football leagues are active in the area and some teams, such as Jackson's Boat FC, have grounds in pleasant surroundings.

In Altrincham, ice hockey was played at the Altrincham Ice Rink in Devonshire Road, built by local businessman Albert Allen (died 2002), who also owned Altrincham's Cresta Court Hotel but this closed in 2003 and was replaced by the Silver Blades "9ce dome" off Moss Lane, Altrincham where the Manchester Phoenix ice-hockey team is based.

Founded in 1861, Sale (Rugby) Football Club's ground is to be found on Heywood Road, near Brooklands Station. Amateur rugby still takes place here. Now separate and owned by Cheshire Sports, the professional version of the game is played by Sale Sharks, who play at Edgeley Park, Stockport.

Sale United FC play at Crossford Bridge, adjacent to the former HQ of the well-known Sale Harriers athletic club. The Harriers now have their base outside the town limits and at one point styled themselves Sale Manchester Harriers. The Harriers were reformed in 1911 after an earlier grouping in the 1890s had foundered.

Ashton-on-Mersey Golf Club (1897) is to be found off Church Lane on a site which was formerly part of Ashton Old Hall's lands. Sale Golf Club was founded in 1913, also on the banks of the Mersey, off Old Hall Road. The club house of Sale Golf Club is the former Sale Lodge, a fine building of 1830, constructed for a Lancashire merchant, Edmund Howarth.

On the Bridgewater Canal between Brooklands and Sale are the moorings of the Sale Cruising Club.

The long-established Sale Operatic Society, which has recently renamed itself Sale and Altrincham Musical Theatre has a Web site. On the dramatic front, the local theatrical troupe is the Sale Nomads.

Sale has three former railway stations, all of which now function as unstaffed and rather sad Metrolink tram stations. The line through Sale is a straight line from Dane Road to the Altrincham border, at Timperley, and it runs parallel to the Bridgewater Canal throughout. All three stations in Sale sit on bridges which span both the railway and the Canal. These stations are, from north to south, Dane Road (opened 20 July, 1931), Sale (opened 20 July 1849) and Brooklands (opened 1 December, 1859). A further station was planned, to the south, near the foot of Eastway, but this was never built. Work on Sale Station's current building began in 1874.

The original steam line was electrified in 1931 but today no British Rail services operate on the line, except on a short parallel section near Altrincham station. Until the arrival of Metrolink, in 1992, local services ran through Manchester to such destinations as Crewe, Alderley Edge and Styal. Metrolink Trams run in rush hours at approximately six-minute frequencies and generally north-bound services alternate between Bury and Manchester Piccadilly as their destination. All south-bound services go to Altrincham apart from the occasional short-working to Timperley. The route is entirely along former railway lines except for street tracks in the city centre. Metrolink's policy of having unstaffed stations means that the facilities have fallen prey to vandalism and roosting pigeons and their failure to publish detailed timetables is an annoyance to pasengers. The service, which with appropriate investment and an integrated ticket system could be excellent, also suffers from insufficient rolling stock, with rush hour trams overcrowded. To the south, the line runs to Altrincham, where there is an hourly rail service to Chester, Stockport and Manchester.

The electric tram reached Sale in 1906, but did not get to Sale Moor until 1912. The motor bus arrived in 1931. Today, the convenience of bus services in Sale centre is adversely affected by the absence of a bus station or central stop, particularly for south-bound services to Altrincham. This inconvenience is compounded by the diversity of operators arising from bus deregulation which make individual bus company passes of limited value. The main bodies operating services are the national companies, Arriva and Stagecoach Manchester., with Go Goodwins dominating local services within Sale. The Manchester firm of Finglands also has a presence on evening and weekend services.

Services to Altrincham from Sale (16,18,19,41,245,263,264) run from a variety of bus-stops on Cross Street/Washway Road and from Hayfield Street/Sibson Road. Sadly, Sale has now central bus station so you have to commit to one route or another. Services to Manchester run from stops on Cross Street/Washway Road. Some of these services also serve the Racecourse (Sale West) Estate (16,17,19), others operate via Sale Moor (18,19). Services also run to Partington (252) and Manchester Airport (19), whilst service 18 runs to the Trafford Centre at Dumplington. Many further connections into Cheshire can be made from Altrincham bus interchange. A once a day National Express coach service to London calls in Sale, using the bus stop at School Road.