The Oxford Mail reports that "Kelvin Thomas believes the arrival of promotion-winner Lewis Chalmers can give Oxford United’s squad another lift. The U’s chairman was delighted to complete the signing of the Aldershot man on loan for the rest of the season.... As predicted in Saturday’s Oxford Mail, fellow midfielder Lee Fowler has left the club...

Thomas told United’s website, 'We have kept a very tight squad all season, and while others have squads of 25-30 plus, we have always been in and around the 20-21 mark... To be able to add a player like Lewis at this stage of the season to our squad is great, as Lewis has been there and seen what we expect to see in this last set of games'...

Chalmers admitted 'I have been really impressed with what Chris Wilder is building here. I know six or seven of the lads already and they have all told me the same thing: that the manager will get the best out of you here, and you will want to run through walls for him'".

The Cambridge News says that "Matt Langston has agreed to go out on loan to Crawley Town until April 18. Langston, along with four other senior players currently negotiating new deals at the Glass World Stadium, were dropped for Saturday 0-0 draw with Gateshead and the Histon skipper's departure was confirmed by the club today. A statement from Histon said: 'All parties concerned are pleased with the outcome'.

"The five key players sensationally dropped from Histon's clash with Gateshead on Saturday will not feature in tomorrow night's match at Tamworth, and may have played their last games for the club. Manager Alan Lewer made that clear after his shock decision to axe skipper Matt Langston, Danny Wright, Nathaniel Knight-Percival, Lanre Oyebanjo and Bradley Hudson-Odoi because of the contracts stalemate. 'It's come to a point now when we had to take a stand and tell people that nobody is bigger than the club', said Lewer. 'We had a meeting on Friday and decided to leave these players out and let them have a week to consider their futures. The contracts they've been offered are decent contracts, some are as good as in League Two, but they are asking for more and more and we can't give it... I've spoken to other managers at full-time clubs and they can't afford these players. The players have to consider that because at the end of the season there are going to be about 3,000 players in the stew looking for new clubs'.

It shows you the sort of money that's been paid out at Histon over the last few years. And if we don't address it now we'll be in trouble... 'The supporters were magnificent, they really got behind the lads, and these players deserved their chance. They are young, they are learning the game and I couldn't fault their effort'... As well as the five players dropped on Saturday, reserve goalkeeper Joe Welch has also been told he will not be selected while he is in dispute with the club about his contract".

NL News 24 says that "Elliott Charles is looking to repay the faith shown in him by manager Lee Harper and help fire the poppies into League Two. Charles has joined Kettering on a short term loan until the end of the season having impressed Harper during a trial at the club.

The 6ft 2in striker was released by Barnet earlier in the season, and while the 20-year-old is ready to do the job his boss wants, Charles is hoping to deliver a bit more. 'I am very pleased to get a deal here', he tells northantset.co.uk. 'I have been training with the squad for just over a month now so I know the lads and I feel I had done well enough to get something... The gaffer told me he was looking for a big target man who could get up there and hold the ball up. But that’s not all I am. I will give him what he wants and hopefully give him even more'".

The Salisbury Journal says that "Salisbury City skipper Darrell Clarke has agreed a new deal on the eve of a return to his hometown club Mansfield Town. Clarke will stay with the Whites for at least another season, and his new deal includes extra responsibilities. The 32-year-old will develop his Football in the Community role, and also assist the club’s new commercial manager Ken Wilde...

And Mikey Thomas "still registered as a player, but [a] qualified coach will now take on a more hands-on role with the reserve team as well as continuing to assist Tommy Widdrington in training and on matchdays... 'I’m going to look to raise the standards of nutrition, hydration and things like that among the players – just trying to help make the club as professional as possible', he said...

Said Widdrington, 'He deserves a huge amount of credit for helping with pre-season training, hydration strategies and individual fitness and strengthening programmes'. Highly-regarded sports therapist James Grigg has [also] been added to the backroom staff. The 25-year-old will head a restructured physio department, leading Kev Bushby and Conrad Parrott. .. 'The restructuring of our medical staff will undoubtedly improve performance on the pitch', said Widdrington".

Congratulations to Sarah Rowley, who had her 21st birthday recently. Sarah, along with the rest of the Rowley family and boyfriend Dan Jones are tireless workers for the Alty cause, with Sarah being particularly involved on the commercial side at Moss Lane when she is not weighed down by her University studies.

Blue Square Football reports on Saturday's opponents; "AFC Wimbledon have revealed that young striker Peter Rapson has joined Walton Casuals on a one-month loan deal. The 17 year-old has already made two substitute appearances for the Dons in the Blue Square Premier this season. However, he has seen his first-team chances further limited recently".

The Football Conference says that "Former Cambridge City winger Scott Neilson has joined their neighbours Cambridge United on a month's loan from League Two side Bradford City. Former Ware favourite Neilson, 22, joined the Bantams in August from the Zamaretto League Premier Division outfit for a £7,500 fee. Neilson has played twenty-seven times for Bradford this season but has been left out in the cold since Peter Taylor took over as manager".

According to Blue Square Football "Mansfield Town's Luke Jones is set to miss the rest of the season after rupturing ankle ligaments. The defender was forced to leave the field in during the Stags' goalless draw against Luton Town on Tuesday".

Due to York City's exit from the FA Trophy, their match against Altrincham at Moss Lane has now been brought forward from Tuesday 20 April to Saturday 13 March at 3pm. 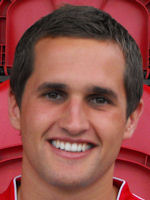 Altrincham forward Chris Senior (right) has won the Blue Square Premier 'Player of the Month' award for February. The former Halifax Town player has had a stop-start career at Moss Lane and this season has been no different as he has battled against injuries and the odd suspension. It’s remarkable then that he has scored thirteen league goals already this season, including five during February. That fine monthly total started with a brace in the 5-0 victory over Salisbury City as Alty kept up their slim hopes of a play-off place".