Altrincham named six players, including all five subs, who had not started a game for the club this season, such was their depleted squad today. And the Robins were, as expected, under pressure for much of the game - the BBC gave Oxford 69% of the possession. Nevertheless, they put in a creditable performance with their very weakened team. In fact, it took a 25 yard shot from Oxford defender Batt to take the points. Alty also had a few chances - notably through Little and Densmore and left Oxford with a nervous closing few minutes. Early on in the game Stuart Coburn was judged to have conceded a penalty but he saved Green's spot-kick expertly.

Luton Today says that "Luton had a Tom Craddock penalty to thank as they ousted Altrincham 1-0 at Moss Lane and one of the standout factors of their victory was the players' fitness, a factor Watson attributes to a slight change in the training schedule. He commented: 'We give the boys a long day. They train, have a little bit of running then we're up the gym for a weights session. We feel from our experience of playing before, Tuesday's always a hard day if you're going to have a Wednesday off. You can see that it's bearing fruit'".

The Football Conference issued a statement on Monday:

"In light of an article published today in the Daily Mail, the Football Conference and our Title sponsor Blue Square, wish to distance ourselves from the report suggesting that Blue Square are to terminate their sponsorship at the end of this current season.

Contrary to that statement, Blue Square indicate, only as recently as last Wednesday, that they are keen to renew their sponsorship for another three year period. To this end, both Blue Square and the Football Conference are currently engaged in talks, with each being complimentary in respect of how the partnership has worked and will hopefully continue to blossom.

The Daily Mail have been duly advised that their article is misleading and potentially damaging, especially in the current financial climate, and has duly acceded to a request to publish a correction in their editions for Tuesday 20th October".

From NL Daily we learn that "Forest Green Rovers FC Ltd is pleased to announce they have now received formal approval from the Football Association, Football Conference and Gloucestershire FA, to change how the club is currently structured and operates.

In 1982, the club became a Limited Company by Guarantee of Members and over the years it has traded effectively under this structure. However, with the building of the new stadium and the excellent facilities it now boasts and with the move of becoming a full time professional club, there is a need to spread the financial load more evenly. Such will enable the club not only to retain its position in the top echelons of the game at our level; but still allow potential to improve both on and off the field.

To this end, as of 1st November 2009 the club and all its attendant activities will come under the auspices of being a new Limited Company by shareholding - Forest Green Rovers Football Club Limited. The formal meeting to take this move will be effected on Thursday 22nd October when full details will be explained to the thirty-eight existing members, who have control of club affairs through an internally elected Board of Directors.

Club spokesman Colin Peake stated: 'We have a first class stadium and undoubtedly without argument, facilities for the community around us, which are second to none. This latest change is part of the whole process of the club being in the best financial position it can be for the future... we need new investment to keep us on an even keel at this time, as well as being in a position to tackle future challenges... Through our restructure and the issuing of shares, the club seek to bring in £100k of new money and investment possibilities. The club will therefore be pursuing all avenues open to it at this time, in an attempt to raise these funds with a minimum of delay'".

At Gateshead "Furious Ian Bogie slammed his side for a woeful performance in the 1-0 defeat at home to Chester City - and promised heads will roll... after their side had been outplayed by the rock-bottom Blues. The players were given both barrels before Bogie emerged to give his damning verdict... He said: 'We were outplayed, out-thought and were second best all over the park. There was no desire, heart or quality and the manner of the defeat was unacceptable... Paul Farman in goal made some great saves and did not deserve to be on the losing side. That apart, we were inept and embarrassing. Some players have shown they are not good enough to play in the Blue Square Premier and they will be moved on'... Bogie added: 'Daryl Clare showed glimpses of the good player he is'... In a week in which Gateshead announced plans to go full-time from next season, Chester showed that such a move will be beneficial".

"Kettering Town FC chairman Imraan Ladak has accused Kettering Council of sabotaging the club's efforts to find a new home. Mr Ladak says the local authority has met with Asda, who had negotiated a deal with the club to build a new stadium and a store on the Kettering Business Park on the A43/A6003, and the chain has since gone off the idea" reports the Northants Evening Telegraph.

The Poppies had called on the council for support as they search for a new site before the lease runs out on the Elgood's Arena in three-and-a-half years' time. If the club fails to secure a new lease or put plans in place for a new ground it cannot be promoted to the Football League, regardless of where they finish in the league table. On Friday the Evening Telegraph reported that the club had been told it should work with other sports clubs in the town to try to find a new home because it wouldn't get planning permission for a joint scheme to build a new stadium and supermarket.

And Mr Ladak spoke about the matter at Kettering Town Supporters Trust's annual meeting...'If the council was interested in the football club they would be trying to assist us. What they have done is destroy what was the only solution to us staying in the borough of Kettering... It leaves us in a difficult position. A lot of people feel the council had abused its position."

The draw for the FA Trophy 2nd Qualifying Round, (to be played on Saturday, October 31st 2009), includes the following ties involving northern clubs... 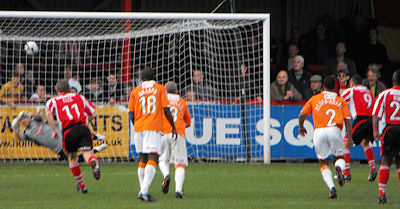 calculates that "Adding to the two red cards, there were also nine yellow cards in a passionate encounter". NL Paper stats show that this season Altrincham have committed the least fouls of any team in the BSP, whilst Mansfield's total is the fourth highest.

The BBC has an interview with the Mansfield manager.

Right: Mansfield's Marriott claims the ball in the first half.

Altrincham paid the price for two defensive errors in a game where once again the referee became a major talking point. It was not that Mr Halliday sent off Chris Senior, who ill advisedly ran 15 yards to push Perry in the chest, who collapsed like a felled oak. Nor was it that he dismissed Matt Doughty for an alleged kick, which earned him a second yellow card, but the referee's general failure to clamp down in the first half on Mansfield's rugged approach to the game (18 fouls in the game to Alty's 7) meant that one or two Mansfield players stayed on the pitch whose cumulative fouls should have earned them an early bath. Four of Mansfield's five bookings only came after the score had reached 2-0.