Grahame Rowley writes, "We are proposing to run a football pontoon, starting on Friday 1st February 2013. To play it will cost you the princely sum of £10 and the winner will receive a minimum of £100 in cash.

The rules are simple...

An updated table showing each person's team and how they are doing will be posted on the website and in the programme as soon as possible. Let me know if you wish to join up for this exciting game of Pontoon. If you have any questions, please do not hesitate to phone me on 07720-606897 or e-mail me.

Many thanks for your support.

Grahame adds that the rules and a list of numbers is diaplayed inthe bar at Moss Lane.

DUNCAN - ONE TO WATCH

In Sunday's NL Paper, their 13 players to watch in 2013 include Duncan Watmore, who is described as "Son of the former FA chief executive, Ian Watmore, the flame-haired attacker broke into the Alty team last season. Now establishing himself as an important first-team player, he has 8 goals in 11 starts. A bundle of energy, he really showed his potential in Alty's FA Cup games against Burton Albion".

One of the other thirteen is Liam Tomsett, now on loan at Hyde from Blackpool. Midfielder Liam enjoyed a spell on loan at Moss Lane last season in which he made five starts.

Also in the NLP, in his "Non-League New Year's Honours List", Stuart Hammonds awards Damian Reeves an MBE, which he describes as "Man Bagging Easily", for his goalscoring success over the past year.

Before the Altrincham v Stalybridge Celtic match on New Year's Day, the Club will hold its annual "Roll of Honour" ceremony to pay its respects to those who have died during 2012 who were connected with the Football Club. The names will be read out by club chaplain, Rev Andy Barclay-Watts of LifeChurch Manchester, followed by a minute's applause in celebration of theirlives. If you have lost a relative or friend who supported the club or know of the death of any former player or member of staff of Altrincham FC, please e-mail the Club as soon as possible.

Those whose deaths have been recorded on the website in 2012 include former groundsman Jack Thorpe and longstanding supporters Arthur Hodgkinson and Renee Stuart.

The Telegraph & Argus reports on our next (and most recent) opponents, Stalybridge Celtic, who beat Bradford Park Avenue 2-0 on Saturday.

"Bradford Park Avenue’s search for their tenth league victory of the season goes on after a fourth defeat on the bounce left them just outside the play-off zone... and they have also been goalless in that spell... They found themselves behind in the third minute...

The Celts' defence stood firm as Avenue came out strong for the second half and, after a brief spell on the back foot, they doubled their advantage. In a 61st-minute attack, Laird laid a square pass into the path of Buckley, who fired an unstoppable shot past keeper John Lamb into the bottom corner... Avenue were reduced to ten men when Marshall picked up his second yellow card in quick succession... and [this] ended the game as a contest.

Avenue’s press officer Lewis Sale said, 'John (manager Deacey) and the lads were stunned in the dressing room after the game. It is so frustrating for them because there were so many chances and balls into the area that just needed a boot on them'".

In the Northants Telegraph, we learn that "Chris Plummer is hoping striker Leon McKenzie will feature in Corby Town’s next two games. But the Steelmen manager has confirmed that recent discussions he has had with the experienced frontman have included the possibility of McKenzie retiring from football after the New Year’s Day home clash with Boston United at Steel Park.

Before then, Corby head to FC Halifax... McKenzie has barely featured for the Steelmen during December due to a tour of the country to promote his autobiography. And he has also expressed a desire to take up a career in boxing in the future...

'I don’t think we will see Leon on the pitch too much', Plummer said... 'We are hopeful he will be available for Saturday and also for New Year’s Day. But he has other things happening outside of football, which we have always known... It is a tough period against some big clubs that have been in the Football League before', Plummer added... 'We have a few walking wounded. The squad is looking thin and we need to address that in the next week or two. We know the targets we want and hopefully we can get them. If we can’t then we will have to think again'".

According to the Oxford Mail, "Oxford City have extended goalkeeper Matt Ingram’s loan from Wycombe Wanderers until the end of the season. The 19-year-old was City’s hero in the goalless draw at Brackley Town on Boxing Day. And manager Mike Ford said, 'Wycombe are chuffed to bits how we have looked after him and the way he has grown and matured as a goalkeeper. He will stay with us until the summer and go back to them for next season, so that is brilliant news'...

When City take on Boston United at the Jakemans Stadium [last Saturday], Zac McEachran will feature again in City’s squad after Ford gave the 18-year-old midfielder his full debut at Brackley. And City’s boss believes the teenager can step out of the shadows of his famous brother, Josh, the England Under 21 international, who is on loan at Middlesbrough from Chelsea. Ford said, 'He can create opportunities and go past people. He is what I call a line-breaker'...

Full-back Jack Mills misses the trip to Boston, who drew 1-1 at home to Corby Town on Boxing Day, with a one-match ban after being sent off at Sutton United. Andy Gunn could come into the side to take his place or Paul Stonehouse or Andy Ballard could switch positions. Ford added, 'Jack has done great, but it is an opportunity for somebody and if they do well they will stay in the team for New Year’s Day'".

The postponment of our trip to Histon yesterday means that Altrincham will have completed just 18 league matches this season before the end of the calendar year 2012. You have to go back eleven years to 2001 to find a season when we played fewer league games before the New Year. In that season of 2001-02 we completed just 17 matches in the UniBond Northern Premier League from August to December. Nine of those 17 matches were at Moss Lane; this season Alty have completed just eight home league matches so far.

But every cloud has a silver lining; for those buying half-season tickets, you will now get 13 home matches for your money! And in 2001/02 we had scored only 29 league goals before New Year; this season we have hit 43 in the BSBN. 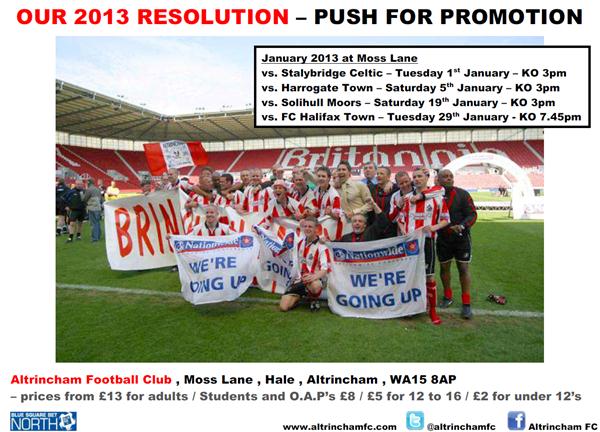 Altrincham FC Marketing Manager, Matt Royle, writes, "Moving into the New Year (weather permitting) we have a good number of home games to look forward to. Due to our fantastic cup runs, home games, particularly on Saturdays, seem to have been few and far between. January sees two traditional Saturday 3pm home games, as well as a tasty Cheshire derby on New Year's Day, not to mention the game against well-followed FC Halifax Town at the end of the month.

All games will be important to our push for promotion and, with the home games continuing to flow in February, we hope to see as many of you there as possible cheering on the lads into the play-off places".

Matt's latest fixture poster is seen, right; click on the image for a larger version which you can print off for display at your place of work, local pub or anywhere else (with permission) that it will attract attention.

And don't forget that the team also really appreciates strong away support. TASC (The Altrincham SUpporters' Club) arranges transport to all away matches. The next scheduled trip is to Worcester City on 12 January; details of the times and fares will be available shortly.