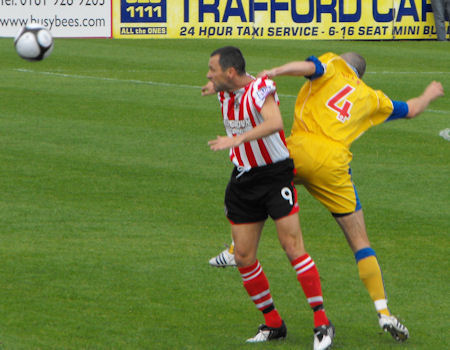 Right: Tim Ryan gets to grips with Alty's Colin Little.

Altrincham's threadbare squad took a deserved point against their Cheshire rivals and, had Dale Johnson been sharper in front of goal when he missed two good second-half chances, the Robins might even have taken all the points. But Chester went close themselves on several occasions so the outcome was a fair one. 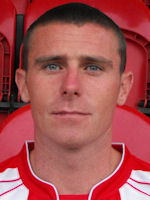 From a personal point of view, it's not been a good week. I felt OK after the Northwich game, but I felt uncomfortable during the warm up against Trafford and whilst I got through 45 minutes of that match, I could feel pain in my pubic bone before the Bolton game amd the first time that I put any pressure on that part of my body in the first half, I knew things weren't right and I signalled to come off. The booking I got was caused by the frustration that I was feeling at the time, but the challenge didn't cause or aggravate my injury.

I'm having something called Gait Analysis done this week. This looks at the way you are running and hopefully it will help me on my road to recovery. The advice I am getting is not to have further injections at this stage, but all I want to do is play football and I am willing to risk having a problem when I am older if it means that I can play now. I'd really like to thank Sean Riley, our physio, for all his help trying to sort this injury out, he has been fantastic throughout and I know that I am getting the best possible advice and treatment.

Going back to the 3-3 draw against Bolton, it's fair to say that Graham was pleased with our play when we were in possession, but not happy with our performance when the opposition had the ball. Their two wide men caused us problems by staying very high up the pitch, but providing very little defensive cover and whilst one or two teams will play in this way once we get our league campaign going, it wasn't very typical of the tactics that we are generally going to be facing. Russell Saunders had another excellent game in goal.He's a great shot stopper and I'm really pleased that he's signed on as in my view he has been our best player in pre-season.

Another very positive influence has been Ken McKenna. He's got a bubbly, infectious character, whilst at the same time being a straight talker and I really think that he will make a big difference to us. It was a blow losing Graham Barrow, but I think that Ken has many of the same qualities and that everyone will benefit from his input.

Tuesday night's game against Manchester United will be a great occasion for the club, but I think that in terms of our preparation for the start of our league campaign against Ebbsfleet, today's match against Burton Albion is more important. We know a lot of their players and they are of a similar mindset to us, so today's game against the Blue Square Premier champions will be an excellent benchmark to assess our progress to date.

The BBC says that "Exeter City striker Steve Basham is set to complete a deal to join Luton Town. The 31-year-old former Oxford forward played in a friendly game for the Hatters on Saturday and is excited to be making the move permanent. 'It's going to be great to be a part of it', Basham, who was released by the U's in 2007, told BBC Oxford... Basham intends to relocate to Oxfordshire following the completion of the move to Kenilworth Road and is currently staying with former U's winger Andy Burgess".

According to Blue Square Football, "Wrexham have announced the signing of right-back Curtis Obeng following his release by Manchester City. The 20 year-old was released by the Citizens at the end of last season... 'Curtis is a quality player', Dragons' boss Dean Saunders told the club's official website, 'Who has training with a number of Premiership clubs this pre-season and we've had to be patient. He's been down to have a look at the training ground and stadium, so I knew he was impressed with the place, but when sides like Wigan are inviting you along for a game, I did fear he might be offered something by one of the bigger boys... I feel he will be a big signing for this club'"

The NL Paper reports that "Alan Lewer is considering sueing controversial Cambridge United chairman George Rolls after being promised the job that was also offered to Liam Daish [Ebbsfleet manager] but actually given to Martin Ling. Former Cambridge number two, Lewer was summoned to the city last Monday and insists he was told he would be unveiled as their manager that night. Former United defender Daish... was told the same and arrived in Cambridge but Lewer received a blunt text message... an hour before the supposed unveiling saying 'sorry not u'. Daish is thought to have received the same message.... Lewer claims he was interviewed four times for the position". Lewer's advisor Tony Turburville added, "Rolls promised him the job last Christmas, telling him Brabin would be gone by the New Year... Rolls offered the job to three people, got them all near the stadium and took his pick. You honestly couldn't make it up". Rolls responded by claiming that Lewer "was never, ever going to manage this club but I felt a duty to the board to at least interview him. With all due respect, Cambridge United would have been scraping the bottom of the barrel if we had employed him. He is a decent number two".

"Steve Evans warned last night that his future could lie away from Crawley Town after he was refused a single penny of the club's possible £250,000 [transfer] windfall". After losing three players Jake Wright, Danny Mills and Ramone McCrae to League clubs, Evans is quoted as telling the NL Paper, "Losing Jake without being able to replace him is absolutely soul-destroying. In a week we begin the season and the board of directors are not concerned in any way, shape or form that we have only 15 players. I'm pretty low and in football you are always contemplating your next move". 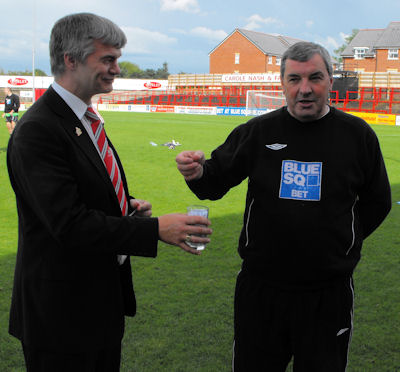 The three winners of the Altrincham FC Patrons' Club draw for free matchday hospitality for the game against Histon on 18th August were: