After two successful years in lower mid-table, Altrincham were rocked in pre-season 2010 by the departures to full-time soccer of leading scorer Chris Senior (to Darlington) and defender Greg Young (to York City). With Colin Little having retired and serious injuries having sidelined Dale Johnson, Matt Doughty and Tom Kearney for much of the preceding season, manager Graham Heathcote was faced with a major rebuilding exercise for the start of the season. Pre-season produced some mixed performances, with just two wins from nine games and an injury to new signing Michael Twiss.

In contrast with the previous season's four-game unbeaten league start, 2010-11 saw Alty fail to win any of their first nine games. Following a creditable perfomance but narrow defeat on opening day at Luton, Alty were cruising at 2-0 against Darlington in game two, before a mix-up allowed the visitors back into the game and a draw resulted from two late Darlington goals. Six straight defeats followed and these led to the departure of manager Graham Heathcote after five seasons battling against better resourced and largely full-time competition in the Conference and his place was taken by assistant manager Ken McKenna. With his new assistant Stuart Bimson, Ken's tenure started badly at Eastbourne, where Alty went down 5-0 to The Sports. 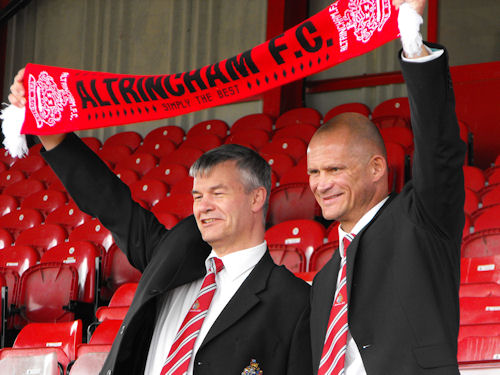 But a win at home to Barrow then sparked a revival and, slowly, the club climbed from the bottom, finally escaping the relegation places for a few days after game 40. But the throwing away of two more 2-0 leads (at Bath and at home against Cambridge United) saw the Robins unable to escape the drop, though a win on the final day against Eastbourne would have secured safety - however, Alty lost 4-3 at Moss Lane.

Once again it was a disappointing season in cup competitions, with defeats to North East opposition in both the FA Cup (Gateshead) and Trophy (Blyth Spartans). Alty did, however, reach the Cheshire Senior Cup Final but, with a relegation rearguard action foremost in their minds, the Robins fielded a much changed side and lost to Northwich Victoria.

Off the field, chairman Geoff Goodwin also departed early in the season, though he continued to provide funds and coach travel for the team. The departures of Messrs Heathcote and Goodwin marked the end of an era during which the club's prudent financial strategy had been proven to be the right one as Alty enjoyed five seasons in the top flight whilst several mis-managed "bigger" clubs went to the wall or faced demotion for financial irregularities. New chairman Grahame Rowley and his Board continued the same sensible approach to the club's finances.

Relegation at the end of 2010-11 was soon followed by management duo Ken McKenna and Stuart Bimson's decision to move on. But the club soon completed a successful recruitment exercise with the appointment in May of Lee Sinnott as Altrincham's first truly external manager since Gerry Quinn arrived in April 1992.

The youth team had a disappointing season, winning just 5 of their 19 NW Youth Alliance Premier Division games but seven of the squad did make first-team Altrincham squads during the season.

The first half of the league season earned Altrincham just 18 points whilst the final 23 matches yielded 26, a second-half rate of points acquisition which would have kept the club in the division had it been achieved throughout the campaign.

There were significant deteriorations both in goalscoring and defensive achievements. Just 47 goals were netted in 46 matches, ten fewer than the previous season. At the back, 87 goals were let in, compared with 53 in 2009-10. The goals conceded were the highest number since 1960-61 when Alty were in the Cheshire County League. The first half of the 10-11 campaign yielded just 18 goals, whilst 29 arrived in the second period of the season. The defence also improved as the season progressed, with 39 goals conceded in the second half of the campaign, whereas 48 were let in during the first 23 matches. 26 points were earned in the second half of the season- the same haul as the previous season when Alty finished 14th.

Below is Alty's league record since 1998-99. The 2009-10 season shows both the full record, including the expunged games against Chester City, and the official league record. For Alty's historical league record (excluding play-offs), click here

Altrincham made their heaviest use of loan players in recent seasons, with nine men being borrowed (Bateson, Baynes, Connors, Jones, Milne, Piergianni, Somner, Wedgbury and Young). Five loanees were used in both of the preceding seasons.

Player turnover was also high in 10-11 with 15 players turning out for the club but leaving before the end of the campaign (Carden, Coates, Crowell, Foster, Hewson, Holmes, Johnson [who later returned], Jones, McCarthy, McCready, Milne, Somner, Wedgbury, Welch and Young).

Eight players who did not appear in league games, were named in cup squads - Jake Barnabas, Mohamed Coly, Joe Coombs, Matt Fearon, Theo Kidd, Sam Langford, Famoud Sonkho and Ashley Woods - and all got on the pitch except Langford.

For the second successive season, 2009-10 Hayes and Yeading United was the only club over whom Altrincham did the double. The following eight clubs did the double over Altrincham; Crawley Town, AFC Wimbledon, Luton Town, Kidderminster Harriers, Newport County, Eastbourne Borough and Histon. The latter duo ended as the bottom two clubs in the league! Alty only achieved two wins against top ten teams - Fleetwood and Darlington. Alty picked up 21 points from top-half finishers and 23 from bottom-half, reflecting that it was poor results against the lower placed teams which cost them their place in the league.

Alty had another poor year in the national cups; they fell at the first hurdle in the FA Cup and the second round of the Trophy, at Blyth. However, they did reach the Cheshire Senior Cup Final in 2010-11 but lost to Northwich. 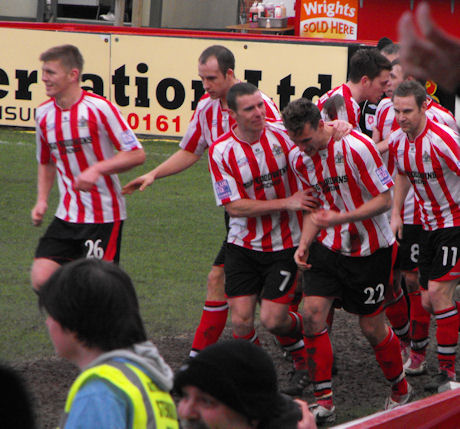 Right: Greg Young receives his team-mates' congratulations after scoring the winner against Kettering.

For the second successive season, Rob Williams was the only player to amass fifty appearances and fellow defender Marc Joseph was next in the pecking order...

Youth player Sam Langford was named in both a league and cup first-team squad but he did not get onto the pitch; fellow youth teamer Ashley Woods was also named in a league squad but did not play, as was Mohamed Coly. The following made a single league start: Andrai Jones. The following only made league appearances as a used sub: Steve Foster (once), Tom McCready (twice).

In 2010-11, more than a quarter (12) of Alty's league goals arived between the 51st and 60th minute, whilst just 14 of Alty's 47 goals were scored in the first-half of games. 11 goals came after the 80th minute of matches. Damian Reeves's first-minute goal at Newport was Alty's quickest of the campaign.

Alty failed to score 17 times in the league; 8 at home and 9 times away. They scored 4 against Hayes and netted three goals in three matches- two against Kettering and also against Eastbourne.

League game goal times are shown below. Because of added time the periods 41-50 and 81-90 actually contain more time than the other time slots. 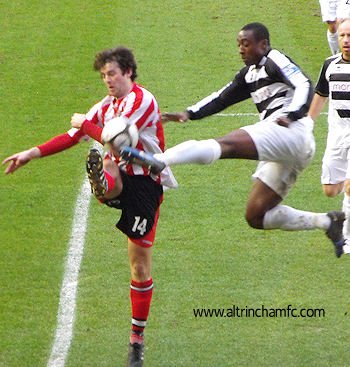 Alty scored more league penalties than in any season since returning to the Conference. Six penalties were netted in league games in 2009-10; five of them coming in the second half of the season. But three were missed in the league, one by Matt Doughty and two by Colin Little.

The 7-0 drubbing at Crawley was Alty's largest defeat, but 5 goals were also conceded at Eastbourne, who were also one of four sides to put four past Alty - the others being Mansfield, Cambridge United and AFC Wimbledon. Mansfield's 4-0 win at Moss Lane was Alty's worst home defeat in 10-11.

In 2009-10 four was the most number of goals conceded in a game – but this happened four times, twice in the last four away games, when three or more goals were conceded on each occasion in very quick order in the second half of matches at FGR and Salisbury.

It was a strange season for discipline, as Alty got to game 24 without seeing a red card and then suffered seven in the final 22 matches. 79 yellow cards came in league games and a further seven in cup matches. Steve Connors was the only man to see red twice; the others were Wes Baynes, Marc Joseph, Carl Piergianni, Anthony Danylyk and James Smith.

In 09-10, the NL Paper recorded Altrincham as the cleanest team in the league, conceding 446 fouls; the highest were Rushden with 655. However, Alty were only fourth from bottom in the card count. In 2009-10, 61 yellow cards and 5 reds were picked up in the league whilst 7 yellows and 2 red were received in the cup competitions. Four of the seven red cards came in two matches with Mansfield Town (one league and one cup). The seven dismissed in 2009-10 were all different players; Densmore, Doran, Doughty, Lawton and Senior in the league and Kearney and Smith (after the game) in the cup match.

The player with most cautions in 2010-11 was Shaun Densmore with 9 from 32 league starts. Sam Wedgbury was the player to play most games (6) without a single booking.

The player with most cautions in 2009-10 was Chris Denham (9 yellows, all in the league), followed by James Smith 7 plus 1 red, Robbie Lawton and Chris Senior amassed 6 yellows and a red each, whilst Anthony Danylyk and Greg Young saw yellow five times. 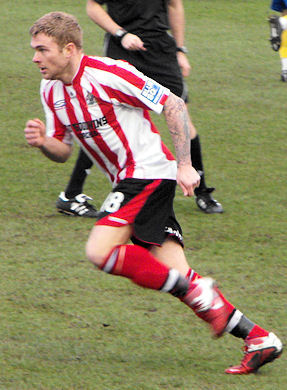 Right: Steve Connors; sent off twice in 11 starts for Alty.

Alty's longest run of successive league defeats was 7 games (games 3 to 9) and their longest run without a win was 9 (games 1 to 9). Their best run of wins was three (games 37 to 39). They went five games unbeaten between matches 37 and 41.

Once again the home match with Wrexham provided Moss Lane's best gate; 1,928. The 558 souls who saw Hayes and Yeading visit Alty constituted the lowest home gate. Away, 6,665 saw Alty at Luton on the opening day of the season whilst just 274 bothered to see Hayes entertain Altrincham.

The 1,821 who visited Moss Lane for Wrexham’s visit provided Alty’s biggest home league gate of the 2009-10 campaign; the same opponents contributed to the largest gate in the previous season, too, but that was higher at 2,619. Likewise the lowest home gate was also against the same opponents who registered that dubious honour last season. In 2009-10, Eastbourne attracted a gate of 590 against 605 in 2008-09; but both matches were long midweek treks for the Sussex side.

In cup matches, the 797 who saw Alty lose to Gateshead at Moss Lane made up the biggest gate. In 09-10, 2,410 watched Mansfield knock Alty out of the FA Cup.