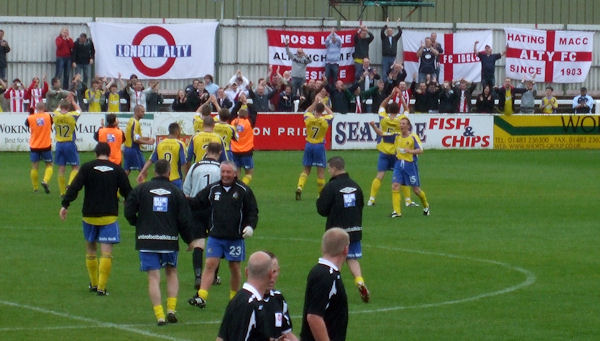 Above: Altrincham celebrate after winning the opening game of the season at Woking.

2008-09 was the most successful in terms of finishing position in the non-League pyramid for Altrincham since 1995-96 as the Robins finished 15th in the Blue Square Premier. Having spent much of the previous season (2007-08) in, or around, the relegation paces, this season got off to a good start with an away win on the opening day at Woking but then Altrincham gained just three draws from their next eight games. The next ten games brought the best run of the campaign with seven wins and a draw. After that, a steady run allowed Altrincham to amass 44 points from 34 games by the time they completed a double over Woking in game 31. Thus, they were seemingly virtually safe with 15 matches left. Then came a poor run of just one win and three draws in eleven games. But seven points gleaned from the final four games kept Altrincham well clear of relegation. It was the first time since 2003, when Alty were in the UniBond Premier, that there had been nothing hanging on the final league game of the season - except, in this case, for our opposition, Cambridge United, who could have won the title had they beaten the Robins 5-0. The game ended goalless.

It was also the first summer in four that Altrincham had not been dependent on the outcome of the Conference AGM in June to confirm their status.

Altrincham reached the First Round Proper of the FA Cup for the second successive year, losing in a replay to Luton Town after Warren Peyton had seen a penalty saved. The replay was a costly game for Altrincham as Luton rrefused to switch the game to a Thursday and thus deprived themselves and Altrincham of £37,500 each in television rights. The Hatters' intransigeance did them no good as they were relegated to the BSP at the end of the season but that was little consolation to the Robins.

Off the field, the newly formed TASC (The Altrincham Supporters' Club), supported the Board as it continued on its prudent path of living within the Club's means.

The youth team finished third in their eight-club league but did not win any trophies this season. However, they finished the season with a promising young squad, most of whom are eligible for next season when their experience should help them to do well. 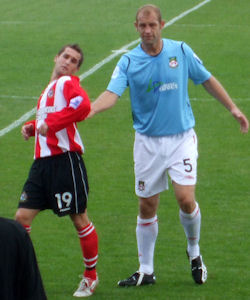 As in 2007-08 Altrincham again made significant use of the loan player system, but not to the extent of 2007-08's levels when the total use of such players reached double figures. This season, five loanees played in the BSP (Banim, Hadfield, Waterfall, Welch and Wilkinson). But an interesting variant on the straightforward loan was the return of five more players who had formerly played for Altrincham and who now signed BSP forms whilst remaining with their current clubs - Danny Heffernan, Rod Thornley, Pat McFadden, Alex Frost and Ben Deegan. Of these, only Rod played in a league game (3 in fact) whilst Pat was named on the bench.

Alty beat four of the teams in the top half of the season, all ex-League clubs - Cambridge, Oxford, Wrexham and Mansfield. In 2007-08 Forest Green were the only top 11 club beaten by the Robins.

Altrincham enjoyed some good cup success in 2008-9, winning the Cheshire Senior Cup, having been runners up last season. They again reached the FA Cup First Round, losing in a replay shoot-out to Luton Town. A low point was the 4-1 home defeat by Southport in the first round of the FA Trophy- the fourth successive time that they had fallen at the first stage in the FA Trophy. They did progress one round in the Setanta Shield competition, having fallen at the first hurdle last season.

In 2008-09 Robbie Lawton failed to make it three seasons in a row as the leading appearance maker:

Three Youth team players were named in first-team squads in 07-08 but never played - Tom Bailey, Danny Browne and Dominic Lillie. In 07-08, three other men played as subs in the Conference but made no starts in that league: Matty Berkeley (2 sub), Colin Potts (13) and Carlos Roca (7).

In 2008-09, Altrincham scored 26 first-half goals and 23 after the interval. Their quickest goal was Chris Senior's against Mansfield after just 11 seconds. Michael Welch's 70-yarder against Crawley was Setanta Goal of the Month. Alty scored four goals in added time at the end of the ninety. There were six Alty goals in the first eight minutes of matches.

In contrast to immediately previous seasons, in 07-08 Altrincham scored far more league second-half goals - they scored 21 first-half goals and 35 in the second half. 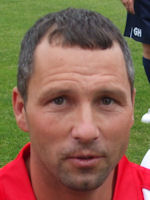 69 yellow cards and five reds were picked up in league games in 08-09 (numbers subject to confirmation). Nine more yellows were received in cup matches. This reversed a downward trend as the yellow-card count was also reduced in 2007-08, with 61 league yellow cards being collected but the red card total then was six. A seventh red card came that season in the FA Cup but all the red cards went to different players. Altrincham's discipline had also improved in 2006-07 with 72 yellows and 3 reds picked up in 46 matches compared with 83 league yellow cards and 4 reds in 42 Conference matches in 2005-06.

In 2008-09 the player with most league bookings was Robbie Lawton with 10. Curiously in eight cup games he picked up no bookings. In all competitions, Shaun Densmore amassed 11 yellow cards and a red, whilst Anthony Danylyk had 8 yellows and 2 reds. 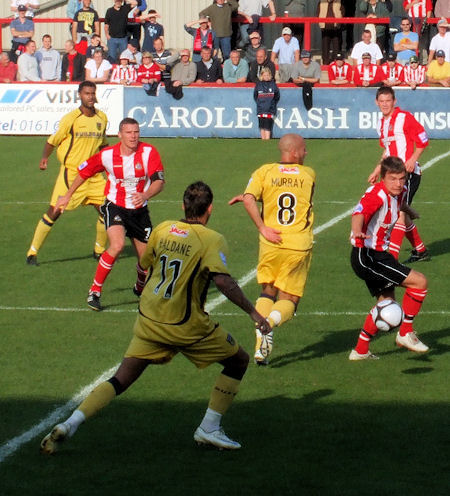 Right: Altrincham's engine room in action in the win over Oxford.

In 2007-08 Alty went 10 league games from the start of the season without a win. Their longest run without defeat in the league was just three games, which they achieved twice (one win and two draws on each occasion).

Altrincham's largest home league gate in 2008-09 was 2,619, versus Wrexham, whilst the lowest was 605 for Eastbourne Borough's midweek visit. Home gates were slightly up on the previous campaign with a Moss Lane average of 1,081 spectators, 18 more than last season. Curiously in the same week as the lowest gate at Moss Lane, Alty also played in the match watched by the smallest BSP gate anywhere all season, just 337 at Lewes. However, they also featured in the second highest BSP gate of the campaign, 7,090 at Cambridge.

Altrincham's largest home gate in 2007-08 was 1,851 versus Northwich Victoria whilst the lowest was 715 for Crawley's midweek visit.

In the 2008-09 cup matches, 2,397 saw Luton play Alty in a midweek FA Cup replay at Moss Lane and 3,200 attended the original tie at Kenilworth Road. In contrast, on 16.9.08 in the Cheshire Senior Cup, just 128 souls came to Altrincham for the match against Vauxhall Motors.