The following article is reproduced from "The Robins' Review" of 21 April 2014.

VAUXHALL MOTORS AND I

Now my heart is full of palpitations as the jostling for those Skrill North play-off positions continues and I am almost as excited as our own beloved Radio Robins media strumpet Brian Flynn would be, if he were ever to find himself sitting on the front row at a Caro Emerald concert.

Alas, I suspect that our failure to collect all three points on offer versus North Ferriby United (NFU) last Saturday afternoon, allied to AFC Telford United’s reportedly somewhat fortunate 1-0 victory at Colwyn Bay, has realistically quashed our prospects of winning this league. Two of the Shropshire side’s remaining fixtures comprise home games against Gloucester City and Gainsborough Trinity respectively and I would fully expect them to glean six points from those two matches and, thereby, surpass the figure of 83 points which constitutes the maximum total that the Robins can now amass.

That much-anticipated clash of the two teams occupying second and third places in the league table last Saturday did not elicit a spectacle of high quality football. As with AFC Telford United, NFU favour a direct and physical approach and their high-intensity compression of the play was irksomely effective in smothering our passing game. 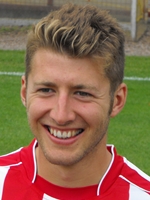 To be brutal, the languid Robins were simply woeful during the first half and just never seemed to get going. We were lured into launching a succession of long and rather hopeful balls towards our front two, an ill-advised strategy which suited the visitors’ robust central defenders right down to the ground. Moreover, at times it was a case of ‘the more you ignore me, the closer I get’ as Kyle Perry and NFU’s Danny Hone seemed to be engaged in their own private wrestling bout! Meanwhile, we failed to exploit the talents of our more creative players Nicky Clee and James Lawrie (left) down either wing. NFU deserved their 1-0 lead at the interval and were clearly winning the war of attrition whilst Alty seemed to be strangely debilitated into a sort of lifeguard sleeping, girl drowning mode.

To general relief amongst the majority of the encouraging attendance of 1,160, a change of formation for the second half prompted an improved performance from Lee Sinnott‘s men. The Villagers failed to muster a single foray of note during the second 45 minutes and Alty gradually assumed superiority although goalscoring chances and shots on target were still at a premium. 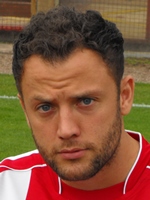 After 74 minutes, James Walshaw’s delightfully enticing left wing cross simply invited Kyle Perry (right) to despatch the ball into the NFU net, however, at this precise juncture the Stubblemelt lead singer proved to be no Spring-heeled Jim and his resulting header soared innocuously over the crossbar.

Now, on occasions I am hated for loving the gargantuan Moss Lane cult figure that was Ian Tunnacliffe but the great man himself would unquestionably have buried that chance!

Thankfully, merely four minutes later, substitute Greg Wilkinson’s first touch resulted in him equalising via a well-executed low shot which took the slightest of deflections and the draw that Alty definitely merited was duly attained.

However, in light of last month’s club statement issued by the Vauxhall Motors FC Chairman Alan Bartlam, which outlined the sad news that they had tendered their resignation to the Football Conference to take effect from the end of the current playing season and would be dropping down several levels of the Non League pyramid, it could be some considerable time before our paths cross again in a competitive first team fixture.

The Motormen’s debut at Moss Lane occurred back on Tuesday, 11th December 2001. Just three days earlier, an FA Cup Second Round match versus Darlington had attracted a crowd of 3,302 to Moss Lane. However, this Unibond League Cup contest (which the Robins won 2-0, incidentally) was witnessed by a meagre attendance of 114, a paltry figure for a competitive game which was only recently usurped by the tally of 106 spectators at Alty’s Cheshire Senior Cup First Round home tie against Stockport Sports earlier this year.

One home game against Vauxhall Motors which is worthy of comment purely from an Alty historical perspective (rather than for anything that actually transpired on the pitch on the night) is the Unibond Premier League fixture staged at Moss Lane on Tuesday, 8th October 2002.

Only a few weeks earlier, the Motormen had inflicted a 4-0 drubbing on the Robins and they swiftly completed the league double over Alty via a straightforward 2-0 victory in what would prove to be Bernard Taylor‘s final home match as the manager of Altrincham FC. Four days later, the Robins crashed out of the FA Cup by virtue of a 2-1 Third Qualifying Round reverse at Guiseley and the Moss Lane Board’s response to that disappointing upshot saw him promptly replaced by Graham Heathcote.

My own debut at Rivacre Park comprised Alty’s first ever meeting with the Motormen in a competitive fixture on a bitterly cold evening back on Tuesday, 26th November 1996. I recollect that the then Altrincham FC Director Mark Harris had been kind enough to give me a lift to this Unibond (Cheshire) Senior Cup Second Round clash and the annals show that 130 hardy souls were present on that night to witness the North West Counties League Division One hosts take on their GM Vauxhall Conference opponents.

The Motormen’s player-manager back then was the former Alty central defender Paul Rowlands, who had endured a rather abridged and ill-fated tenure as the Robins’ player-manager between November 1993 and February 1994.

In his programme notes for this particular encounter, Rowlands reflected on his two contrasting spells at Moss Lane: “Their manager John King and his right-hand man Graham Heathcote were the biggest influences on my career - quite simply, they were the best playing days of my life. My one regret about my time at Moss Lane was the fact that I was not given a real chance when they placed me in charge at the club - but that’s now history.”

What unfolded in due course was a scenario in which the pupil outwitted his erstwhile teachers, as Rowlands guided his fired-up charges to a 2-1 success over the perfunctory Robins, for whom the ex-Wigan Athletic midfielder Neil Rimmer scored the solitary goal of his fleeting Moss Lane career.

Individuals who have enjoyed playing time with both clubs have included the likes of goalkeepers Andy Ralph and James Coates; defenders such as Steve Aspinall; the aforementioned Paul Rowlands; Steve Cross; Paul Jones and that egregious donkey James Glendenning; midfielders Robbie Lawton and James Olsen plus forwards such as Nick Welton; Lee Kissock; Pat McFadden; the nomadic Kevin Holsgrove and the enigmatic and elusive vanishing act of two seasons ago that was a certain Leighton McGivern.

Of those select few, the two most successful imports from the Motormen to Moss Lane respectively have undoubtedly comprised the versatile Steve Aspinall, who clocked up the sum of 158 (+18 as sub) appearances and scored 20 goals for Alty between July 2003 and June 2008, and the Robins’ one-time captain Robbie Lawton, who arrived at Moss Lane in June 2006 and accumulated a tally of 217 (+14 as sub) appearances, scoring nine goals in the process, prior to his departure from the club in November 2011.

This article is being compiled before Good Friday’s scheduled Skrill North assignment against Stockport County and I‘m looking forward to undertaking only my second ever visit to Edgeley Park. My sole previous appearance there coincided with the last occasion on which the Robins played a competitive fixture at that particular stadium i.e. Saturday, 17th January 1976, way back in the days when I used to be a sweet boy. On that afternoon, a Mickey Brooke goal after 75 minutes sealed a 1-0 victory over Stockport County Reserves in a Cheshire Senior Cup First Round tie. I don’t possess the attendance figure for that particular match, however, I have an inkling that Good Friday evening’s gate may just turn out to be somewhat higher. Here’s hoping for the same outcome on the pitch. 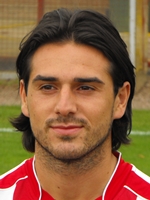 I listened to the splendid Radio Robins coverage of last Tuesday evening‘s 2-1 victory at Oxford City and it was evident that the Robins were required to exhibit plenty of endeavour on a heavily-sanded and remorselessly erratic pitch. By the sound of things, the top-drawer strikes for both of the Alty goals from James Walshaw and Jake Moult respectively were like oases in the Oxfordshire desert.

As the 2013/14 Player of the Season awards are scheduled to be revealed after this afternoon’s match, I thought that I’d better disclose my own nominations now rather than then trying to look wise after the event (a situation which, admittedly, rarely arises). In the time-honoured style of Eric D Morley at a 1970s Miss World contest, I shall announce the results in reverse order.

In third spot: Scott Leather. To my mind, the most-improved player of the campaign, who now looks like a really exciting prospect for this club.

My runner-up is the redoubtable James Walshaw, who has enjoyed a superb first season with the Robins. Following his arrival from Guiseley, his goal was to score goals and he has undeniably fulfilled his raison d'être with a tally of 29 to his name in all competitions as I pen these notes.

First place goes to Gianluca Havern (above, right), who has started every one of the Robins’ 39 league fixtures to date and has been a model of consistency throughout the season. I don’t anticipate this accolade being bestowed upon him though, as defenders seldom prevail in these end-of-season awards, however, he certainly warrants some recognition and acclaim for his unstinting efforts on behalf of the Alty cause.

So, there we are, an intriguing few weeks of the season beckon. Hold on to your hats. Indeed, hold on to your friends’ hats, too. In fact, even hold on to George Heslop’s legendary 1970s red-and-white bobble hat if you can somehow manage to locate its actual whereabouts. It could yet become the Turin Shroud of Moss Lane memorabilia". BARRY PIKESLEY