The following article is reproduced from "The Robins' Review" of 12 April 2014.

As I write the first draft of this article, just over 48 hours have elapsed since I trudged somewhat disconsolately out of AFC Telford United’s stadium in the aftermath of Lee Sinnott’s team’s disconcertingly supine performance in a 3-1 defeat.

This deflating experience comprised my first visit to The Buck's Head since Saturday, 28th September 1996, when I watched the artist formerly known as Telford United and a Robins team including the likes of Matt Dickins; Darren Heesom; Mark Maddox; Ricky Harris and Mick Carmody play out a nondescript goalless draw in a GM Vauxhall Conference fixture and the revamped ground certainly bore little resemblance to my memories of it from that particular afternoon.

Alas, our defence would not prove to be as watertight on this occasion.

As in this season’s corresponding league fixture at The J Davidson Stadium back in February, the Bucks seized the initiative straight from the kick-off and, in truth, they should have gone on to establish a commanding lead before the half-time interval.

Whilst it’s true that Liam Watson’s direct style of play may not earn many marks for artistic impression, it is undeniably effective in this division and we seemed strangely ill-prepared to combat and counter it on the day.

In fact, our normal passing game simply evaporated and we contrived to play right into their hands by conceding needless free-kicks in our own half and thereby putting ourselves under pressure. Twice an unmarked AFC Telford United player in the penalty area would proceed to head the ball past Stuart Coburn from such situations.

The home side’s player-coach Alan Moogan dictated matters in midfield, whereas the Robins largely struggled to engender many goalscoring opportunities. James Lawrie did exhibit a frustrating profligacy on the day by overhitting the majority of his free kicks, however, he did at least elicit a decent save from Ryan Young early in the second half from one set piece, which represented our first shot on target.

Our best chance in the first half had fallen to a below par Jake Moult. Taking advantage of a defender‘s slip, he had advanced into the penalty area on the left side, whereupon, alas, his composure promptly deserted him as he unleashed a wildly inaccurate shot which duly endangered the well-being of the likes of Alty Club Shop stalwarts Campbell, Dave and Ian who were sitting towards the end of the main stand rather than flashing into the Bucks’ net. 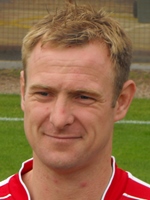 Anyhow, credit to James Walshaw (right) for his perseverance in poaching his fifth goal in five consecutive games by capitalising on a defensive blunder but we were simply vanquished by a more resolute outfit on the day.

Seven days earlier had witnessed our third excursion of the season to Colwyn Bay and, indeed, a much more preferable and enjoyable upshot.

At this juncture, I feel obliged to carp about my pre-match G&T in the Colwyn Bay clubhouse, which was actually more like a case of T&T and even weaker than an apology in the House of Commons by the erstwhile Culture Secretary, Maria Miller.

However, the Seagulls are a tricky proposition on their own territory and having irritatingly allowed them to gain a foothold in the game via some rather slapdash defending, Alty had cause to mount an effective rearguard action for the lion’s share of the second half, which did, admittedly, contain one or two precarious moments. Then along came Nicky Clee and his archetypal educated left foot.

I find it rather sad that the matchday experience of attending an Alty fixture at the Red Lion Foods Stadium has deteriorated so markedly during the Frank Sinclair regime in Old Colwyn.

On your arrival there nowadays, you are greeted by more bouncers than a Colin Croft bowling spell in New Zealand in 1980. Indeed, all those black-clad SIA ‘security consultants’ on duty render the experience of entering the stadium akin to attempting to gatecrash a Snoop Dogg aftershow party rather than just turning up for a Skrill North fixture watched by fewer than 500 spectators.

Having observed those security personnel/Praetorian Guard react in such an egregiously excessive manner to a group of Alty supporters who were merely celebrating Nicky Clee’s sublime free-kick, I dread to think what on earth they would have done had they been presented with that unforgettable vision of an ultra-exuberant Brian Flynn screaming like a rabid jackal and running frenziedly up and down a grass bank which greeted Paul France’s last minute equaliser for the Robins on our debut at Llanelian Road in a FA Trophy First Round tie back on Saturday, 20th January 1996, which concluded in a 3-3 stalemate!

Time for a few reflections on the recent 0-0 draw at home to our old foe Boston United.

It was certainly a tense and tight war of attrition and, in a game in which there was a paucity of presentable chances, I thought that the Pilgrims marginally edged it by virtue of them carving out the better opportunities and definitely keeping Stuart Coburn more occupied than his opposite number. 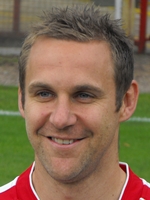 However, the outcome could well have been very different had referee Jonathan Hunt issued the straight red card which Indy Aujla’s outrageously late challenge on Nicky Clee (left) in the fifth minute surely merited. The subsequent enforced withdrawal of the injured Skrill North Player of the Month for March 2014 contributed significantly to Boston United’s ability to nullify Alty’s creative potency on the night.

Any lingering sense of injustice was then exacerbated when the same offender fouled James Lawrie after 58 minutes, only for him then to escape without being penalised via a warranted second yellow card from the perplexingly lenient official.

The combative and yet impressive Pilgrims succeeded in becoming the first team to prevent the Robins from scoring in a home league fixture since Gainsborough Trinity’s narrow 1-0 victory at Moss Lane on Saturday, 8th December 2012.

However, I have to say that their, at times, somewhat cynical and atavistic ‘take no prisoners’ approach evoked dark and traumatic memories for me of those ruthless and successful Jim Smith/Howard Wilkinson-managed Boston United sides of the early and mid-1970s. Send for John King and Stan Allan!

May I also add that it was splendid to see the venerable George Heslop back at The J. Davidson Stadium for the visit of Boston United after his recent suspension owing to health problems, which at one stage saw him taking more pills than Kurt Cobain in 1990. I must confess that home games just haven’t been the same without the post-match ritual of insulting the moustachioed old codger in the Noel White Suite. Welcome back, you old dodderer!

I can also exclusively reveal that the BBC have selected Mister Heslop as their replacement for (the astonishingly even older figure of) Bruce Forsyth as the host on the next series of Strictly Come Dancing. George is the natural heir, as those of us who were privileged to witness him demonstrate his jive in the Noel White Suite circa 1997 will readily testify.

So to this afternoon’s visitors from the East Riding of Yorkshire, (my dear wife would never forgive me if I were to use the term ‘Humberside‘), who are making their debut at The J Davidson Stadium.

Following our setback in Shropshire last Saturday, I had resigned myself to thinking that today’s clash would purely concern the contest to finish in second position in the league table. However, AFC Telford United's 2-0 reverse at in-form Oxford City on Tuesday night, allied to our professional demolition of ailing Workington, has rather unexpectedly opened up matters once again at the summit of the Skrill North.

I followed last Tuesday evening’s events up at Borough Park courtesy of Radio Robins (or Radio Flynns, as it will soon be known) and it was a relief to hear that we had sidestepped a ‘banana skin’ against a team who had held this afternoon’s visitors to a 3-3 draw on the same ground only a fortnight earlier.

If Alty should today contrive to record their first victory over the Villagers at the third attempt and our dear old friend Frank Sinclair’s gallant boys were to derail AFC Telford United in North Wales simultaneously, dare we dream yet again of the tantalising prospect of actually winning this league?

To paraphrase the rallying cry of The Fall’s Prestwich-born Mark E Smith, 'Hit the North Ferriby!'