The following article is reproduced from "The Robins' Review" of 12 December 2015.

"A rather deflating 4-1 GM Vauxhall Conference defeat at Bromsgrove Rovers on Saturday, 12th December 1992 may not instantly stand out as being a particularly memorable episode in the annals of Altrincham FC. Nevertheless, I would contend that it constitutes a truly momentous occasion inasmuch as it marked the debut for the Robins of none other than that colossus and eventual Moss Lane cult figure: the mighty Ian Tunnacliffe.

In his first season as the Robins' manager, the Huddersfield-based PE teacher Gerry Quinn had already guided Alty to their 15th victory over a Football League club in the FA Cup in the shape of that unforgettable 2-0 conquest of Chester City.

However, as the Robins prepared to visit the Victoria Ground 23 years ago for their first ever meeting with the then third-placed Worcestershire club, they were the joint lowest scorers in the division and languished in 20th position in the league table (only one place above the relegation zone).

In the aftermath of the previous Saturday's 4-1 FA Cup Second Round home defeat by Port Vale, the Robins' boss introduced two new faces to his squad. The distinctly diminutive 22-year-old left full back/midfielder John Smith arrived from Northwich Victoria and Quinn yet again opted to plunder his former club Emley in order to recruit the towering 6ft 5in striker Ian Tunnacliffe. 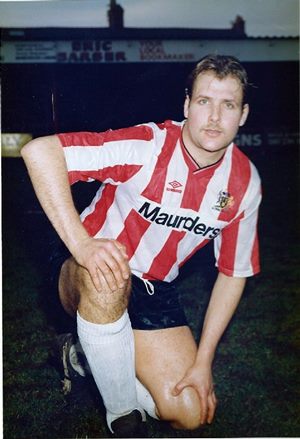 After a fairly even opening 45 minutes, the Robins conceded a goal right on the stroke of half-time. Mark Crisp's left-wing cross reached the unmarked Mark Whitehouse inside the six-yard box and the home side's leading goalscorer headed the ball past the powerless Paladino.

Parity was briefly restored in the 55th minute. Rovers' goalkeeper Scott Cooksey was softened up by a collision with Alty's behemoth Tunnacliffe and he duly required extended treatment. When the ensuing delayed corner from Clive Freeman came across, Paul France promptly emerged to head home his first goal for the club.

Rovers regained the lead merely eight minutes later when Ogley and Freeman failed to nullify Tom Daly's right-wing sortie and Whitehouse again capitalised on some slipshod marking to head his second of the game.

Alas, Ricky Harris squandered a gilt-edged opportunity to equalise and the Robins were thereafter largely unable to apply any pressure on the palpably impaired Cooksey. Meanwhile, the hosts simply stepped up a gear and proceeded to rattle in two late goals.

In the 81st minute, the erratic Paladino (for whom this game would comprise his Alty swan song) was forced to leave his area and his clearance went straight to Paul Webb, whose resulting exquisitely-executed 40-yard chip sailed over the stranded erstwhile amateur boxer and onwards into the vacant net. All that remained for the flagging Robins was for Daly to administer the coup de grâce after 89 minutes.

In his report for the Sale & Altrincham Messenger, Mark Harris awarded the Alty man of the match accolade to the Robins' strapping No. 9 whilst asserting that: “One ray of sunshine in an otherwise dismal afternoon was the form of new signing Ian Tunnacliffe. The huge target man showed neat skill as well as considerable strength.”

Alty's relative journey into the unknown under the aegis of Gerry Quinn culminated in a respectable 10th-spot in the final league table. The campaign concluded with an eight-match unbeaten run consisting of five victories and three draws, during which that peerless titan Tunna scored four goals".

BARRY PIKESLEY (with thanks to Mike Garnett).