The following article is reproduced from "The Robins' Review" of 3 October 2015.

"Goalkeeper Nick Banner may have mustered the meagre total of just six first team appearances for Alty but his roller-coaster spell at Moss Lane did see him collect an Alliance Premier League Challenge Shield (APLCS) winner's medal and also wear the No. 1 jersey in two consecutive 5-4 away defeats in the Alliance Premier League (APL).

A former Everton junior, who had subsequently gained experience with Runcorn in the Northern Premier League, Banner was signed on a free transfer from Bangor City by Alty boss Tony Sanders in August 1981 as the understudy to John Connaughton.

The blond 22-year-old's debut for the Robins transpired when he deputised for the injured Connaughton in the reigning champions' 4-2 APLCS victory over the previous season's runners-up Kettering Town at Moss Lane on Monday, 24th August 1981. His final Alty appearance would unfold against the very same opposition just a few weeks later. 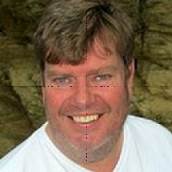 On Saturday, 19th September 1981, the Robins travelled to Rockingham Road for an APL fixture. Banner was set to record his fifth successive appearance in the continued absence of Connaughton, who had been sidelined both as a result of his recent marriage and being afflicted by a recurring thigh strain (although I don't think that the two were connected).

Goals from Dave Roberts and the perma-tanned Nicky Evans inside the opening 26 minutes enabled the hosts to establish a 2-0 lead before Jeff Johnson pulled a goal back in the 34th minute.

Five minutes into the second half, Atkins claimed his second goal with a shot from a narrow angle to leave the Robins 4-1 down and ostensibly doomed to defeat. However, Graham Heathcote then replaced Ivan Crossley and his introduction promptly inspired a valiant fightback.

In the 63rd minute, Rogers shuffled past the Poppies' player-manager Colin Clarke and his left-wing cross set up a goal scored by virtue of that rarely-witnessed collector's item - a Graham Heathcote header! Just two minutes later, it was 4-3 courtesy of a trademark Heathcote free kick from long range.

A 76th-minute fracas between Nicky Evans and Stan Allan culminated in a double sending-off. The Kettering striker was instantly dismissed for violent conduct, having punched his pesky Scouse tormentor, whereas the Robins' full back incurred his second booking of the match for persistent misconduct.

In front of a crowd of 1,425, Alty's resurrection continued and the influential Heathcote then created an 81st-minute equaliser when his pinpoint free kick to the far post was volleyed home by John Rogers.

Alas, calamity struck merely seconds later when the Poppies were awarded a penalty after John Davison had been adjudged to have handled a header from Kettering winger Peter Phipps.

Frank Murphy proceeded to hit the post with his spot kick but then Jeff Johnson's miscued clearance only diverted the ball back into the danger area. Murphy's second shot elicited a fine save from Banner but the rebound fell to Paul Haverson, who joyously drove home a low shot for the winning goal.

Only 11 days earlier, the Robins had succumbed to the eventual 1981/82 APL champions Runcorn at Canal Street by exactly the same scoreline.

On that lamentable occasion, the Robins were 4-2 ahead with only 15 minutes left to play but a woeful capitulation ensued during which they conceded three goals, one of which was netted by the erstwhile Alty midfielder Ossie Smith. Barry Whitbread scored all four of the Robins' goals on that evening".