The following article is reproduced from "The Robins' Review" of 11 October, 2014.

Well, if James Lawrie hadn't already written himself into Altrincham FC folklore by virtue of those two goals in last season's engrossing play-off matches, then his majestic 90th-minute coup de grâce against the nefarious Macclesfield Town last week unequivocally secured his apotheosis in the eyes of the Alty faithful!

And to think that, merely three days previously, I had contrived to vex his mother in the main stand via an exasperated bellow of despair when her son had lost possession in a key area during what would proceed to be the build-up to Welling United's third goal in that excruciating 4-0 capitulation at the J Davidson Stadium. 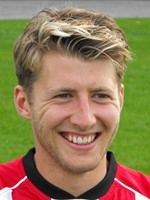 In my defence, Mrs Lawrie, even Lee Sinnott deemed it appropriate to divulge the following revelation last week; “I will be honest with you, I do find James infuriating at times.”

Snap! So, it's not only me! This frustration genuinely arises from knowing just how much ability James Lawrie (right) actually possesses, as he subsequently demonstrated so memorably against our adversaries from that strange town called malice.

I must confess that in all my 40+ years of watching Alty v Macc confrontations, I'm struggling to recall a more dramatic eleventh-hour intervention from an individual to win a derby. Magnificent stuff, indeed, and whilst, admittedly, that momentous goal alone may not entirely eradicate those 17 years of hurt for many Robins supporters, it will be a start!

Incidentally, has any explanation yet been forthcoming as to why the Silkmen didn't wear their traditional blue-and-white kit on the night? Were they under the impression that sporting a pretty green shirt would spook us by conjuring up ghosts of the heinous Northwich Victoria?

This fashion quandary for the style council duly prompted one correspondent on the Silkmen's fans' Wraggs To Riches message board to propound the ensuing theory: “We lost against Chester, Lincoln and Alty – all wearing our green kit. We scraped through at Dover – played crap though – again wearing our green kit. I just wonder if players struggle to see themselves. The kit is a darker shade of green than the grass but last night at Alty, I saw the players who usually are so accurate in their passing play as if they couldn't see their team mates properly. I know that this will probably be dismissed by all other fans on here but I believe there is something in it. It is not a coincidence that when we have worn our green kit, we have struggled.”

Mind you, didn't we used to have an orange-and-white away kit that was seemingly cursed?

To modify the quote attributed to the former Labour Prime Minister Harold Wilson, a week and a half is a long time in the Vanarama Conference. I believe that whilst most Alty supporters accept that although throughout this season there will inevitably be occasions when, regardless of how well the Robins perform or how much effort the players put in, we will face teams who are simply too good or strong for us to beat, surrender will not be tolerated.

The aftermath of that débâcle against Welling United raised a pivotal question: were we heading for months of unremitting misery and a series of mortifying drubbings à la the ones endured by Hyde at this level during the 2013/14 campaign or would the management and players' response to that ordeal prove to be a watershed in our season? Thankfully, the answer looks like being the latter.

At that nadir, I suspect that even the most sanguine of Alty diehards would never have predicted that our next three league matches would see us accumulate a laudable tally of seven points out of a possible nine; record two clean sheets and also inflict the first home defeat of 2014 upon second-placed FC Halifax Town. Not to mention all of that unfolding without even a single goal emanating from Damian Reeves!

All in all, a superb renaissance, culminating in last Tuesday evening's gritty performance to earn a precious point at Grimsby Town, which featured some gratifying instances of vintage Stuart Coburn (in addition to a fascinating pre-match mea culpa from Brian Flynn on Radio Robins pertaining to that proverbial hot potato of the modern world: smoke bombs at the J Davidson Stadium!).

Woking arrive in Cheshire this afternoon lying on the periphery of the play-off places and including amongst their ranks the Vanarama Conference's current leading goalscorer in the guise of Scott Rendell, whose personal account stands at 11.

The Kingfield Stadium club will be making their first appearance on this ground since a Blue Square Premier fixture enacted on Saturday, 21st February 2009, from which the Robins emerged triumphant courtesy of Chris Senior's 27th-minute goal.

Woking's debut at Moss Lane as GM Vauxhall Conference (GMVC) absolute beginners occurred back on Saturday, 6th March 1993. The Cards had attained promotion by finishing the 1991/92 Diadora League season as Champions by an impressive margin of 18 points over runners-up Enfield and were then under the management of the long-serving and highly-respected Geoff Chapple.

Residing in fourth position in the GMVC table, Woking were cheered on by three coachloads of away supporters in the crowd of 839. Meanwhile, Gerry Quinn's Alty side occupied 16th spot, nine points behind their opponents from Surrey but with two games in hand.

The Robins proceeded to register their only league double of that particular season by means of a 1-0 victory achieved by John Smith's 9th-minute goal, which arose from a somewhat bizarre incident.

The Cards' goalkeeper Laurence Batty had been adjudged to have handled a rather inconvenient back pass from one of his defenders, all of which entailed the award of an indirect free kick just eight yards out from his goal at the Golf Road End. In contrast to that similar set-piece situation featuring Nicky Clee during our recent encounter with Macc, the 1993 Robins did not squander the gift. Mick Carmody rolled the ball back to John Smith on his left and, notwithstanding all 11 Woking players being amassed on the goal-line, the diminutive left full back scored for the second successive game by somehow finding the back of the net via a low left-footed shot.

The Robins largely dominated proceedings, however, a second goal eluded them. Mick Carmody's long range shot struck the crossbar and a Ricky Harris effort hit the post in the second half. A late opportunity to put the game beyond Woking's reach fell to the towering Tunna but, alas, the erstwhile Emley centre forward who was frequently and unjustly accused of having eaten trifles, was unable to convert the chance.

A contented Gerry Quinn issued the subsequent synopsis: “I felt that Saturday's win over Woking was another fine performance and a continuation of our recent good form. We defended well and Andy Newell hardly had a save to make. Ray Sidderley has now blotted out the threat of (ex-Reading striker) Trevor Senior in two matches this season, whilst Mark Ogley marshalled the whole unit particularly well. What we must now learn to do is take more of the chances that we create in order to kill teams off.”

The Robins would have to wait a fraction over three years before recording their next home success over Woking. Saturday, 9th March 1996, to be exact, when Alty's 2-0 conquest in a GMVC match witnessed by 972 spectators dealt the Cards' title hopes a significant blow.

My principal recollection of that contest is of the Robins chiefly withdrawing into their own half, defending manfully in numbers and adopting a cagey counter-attacking strategy against the free-scoring and third-placed Cards, who would go on to finish as runners-up for the second consecutive season.

These tactics paid off handsomely. The attacking threat posed by the likes of Darren Hay and Clive Walker was stifled and Alty duly established a two-goal advantage before half-time through goals from Paul France (37 minutes) and Barry Butler (41 minutes) respectively. Alas, just over six months later, the hapless Butler would break his leg in two places during a 1-1 GMVC stalemate versus Woking at Moss Lane, an injury which resulted in his career with the Robins being curtailed.

An elated John King issued the following post-match précis: “Although Woking managed 13 corners, our defence only gave them three shots at goal and when they did so, Jerome John was in fine form. We expected pressure from a team that scores a lot of goals and dealt with everything they were able to throw at us. At the other end, Stuart Terry and the other forwards were flying, causing their defence lots of problems.”

One additional Moss Lane clash between the two clubs that's worthy of being mentioned transpired on the evening of Thursday, 31st January 2008. This Blue Square Premier League fixture had been brought forward from its scheduled spot on the subsequent Saturday afternoon in order to enable the event to be broadcast on the Setanta Sports channel (the first and only occasion on which their cameras would grace Moss Lane to cover a live match).

In front of a gate of 905, Frank Gray's Woking side looked to be destined to collect all three points via goals from Bradley Quamina (35 minutes) and Marvin Morgan (55 minutes). However, the Robins promptly staged a somewhat unexpected rally. Colin Little pulled a goal back after 57 minutes and the comeback was sealed 14 minutes later when on-loan defender Ryan Shotton unleashed a point blank range shot into the upper part of the net to level matters at 2-2.

Meanwhile, I note that the construction of the new Community Sports Hall continues to progress apace. I presume that its plush interior will eventually boast all mod cons, including a bespoke granny flat (or should that be 'grandad flat'?) designed specifically to act as a new permanent residence for George Heslop? Or will the ancient superhero himself be going underground to dwell in his own equivalent of the Batcave?

Woking's most famous musical son Paul Weller (a namecheck for whom should at least be acclaimed in the City-supporting faction of the Altrincham FC Board Of Directors) once asked: just who is the 5 o'clock hero?

Well, let's hope that when we gather in the jam-packed Noel White Suite for a post-match celebratory drink or two, we are all happy together, toasting a Robins idol, and today's result has turned out to be a case of the Alty public gets what the Alty public wants. BARRY PIKESLEY (with thanks to Mike Garnett)