The following article is reproduced from "The Robins' Review" of 30 September, 2014.

Ah, Alty and Macc facing each other in a league fixture at last! Just like the estranged Morrissey and Marr, the special relationship has been severed for simply far too long.

Astonishingly, 17 seasons have now elapsed since the two clubs last co-existed within the same division. Sure, there has been the occasional skirmish and accompanying brouhaha in the Cheshire Senior Cup during that hiatus, however, as with when Johnny Marr assumes the role of the lead vocalist on There Is A Light That Never Goes Out, it's just not really the same, is it?

I started supporting the Robins in the early 1970s and back in those days of the Northern Premier League (NPL), Macclesfield Town comprised the big local derby, customarily entailing that the two rivals should meet on Boxing Day and New Year's Day respectively (memo to the archaic fixture compiler for the Vanarama Conference: please note for possible future reference).

The conclusion of the 1978/79 NPL season marked the first major parting of the ways. The Robins rounded off that particular campaign as the runners-up and duly embarked upon their adventures in the brave new world of the Alliance Premier League. In stark contrast, the ailing Silkmen suffered the ignominy of finishing rock bottom of the league table and, consequently, missed out on the opportunity to participate in this new national division.

The two clubs would spend eight seasons apart before Macc finally achieved promotion to the elite of Non League football and they accordingly took their place alongside Alty for the 1987/88 GM Vauxhall Conference (GMVC) season.

The last occasion on which the two foes confronted each other in a league fixture constituted a 1-1 GMVC clash witnessed by 2,383 spectators that was staged at the Moss Rose on Saturday, 5th April 1997.

At that juncture, Sammy McIlroy's Silkmen were vying with both Kidderminster Harriers and Stevenage Borough in a tense contest for the league title. Meanwhile, John King's Alty had found themselves embroiled in a rather perturbing quagmire at the opposite end of the league table by virtue of a wretched run of 13 GMVC matches without a victory. In fact, the Robins had not contrived to win a league game since December of the previous year, when Bromsgrove Rovers had been conquered 3-1 at Moss Lane.

The high-flying home side were unexpectedly subdued on the day and the Robins comfortably matched their hosts during what unfolded to be a strangely humdrum derby.

However, it was Macc who eventually drew first blood after 62 minutes, when Peter Davenport's swirling right-wing corner kick was misjudged by the Robins' goalkeeper Matt Dickins and an unmarked Steve Wood was on hand at the far post to head the ball into the roof of the Alty net.

The Silkmen's lead was to last for a meagre three minutes though. Darren Heesom got in a header in the Macc penalty area, which was in turn deflected towards the goal by the Robins' forward Sammy Ayorinde. Steve Payne managed to scramble the ball off the line but only as far as Stuart Terry, who gleefully hammered the ball home from 10 yards.

At that time, the lady who would go on to become the first Mrs Pikesley was actually a resident of Macclesfield (though I hasten to reiterate that her own allegiance lies to Shrewsbury Town). Therefore, that respectable draw for the Robins at least made going out in the town that evening a trifle more bearable, not to mention the prospect of having to face her Macc-supporting cousin.

The finale of that season would see the two clubs' fortunes head off on radically disparate paths. The Silkmen duly attained automatic promotion to the Football League, where they would remain for 15 seasons, whereas the Robins concluded the campaign at the foot of the league table and were promptly exiled to the relative wilderness of the Unibond League.

In order to unearth Alty's last league victory over Macc here at Moss Lane, you have to go back to a GMVC fixture enacted on Easter Monday, 12th April 1993, which saw the Robins emerge triumphant 1-0 in front of an attendance of 1,143.

Both clubs approached the encounter somewhat haunted by relegation concerns and separated by just a single point (in Alty's favour). Gerry Quinn's Robins had recorded only a solitary win during their previous nine league matches, whilst Peter Wragg's Silkmen's preceding 12 GMVC games had elicited merely a lone victory. 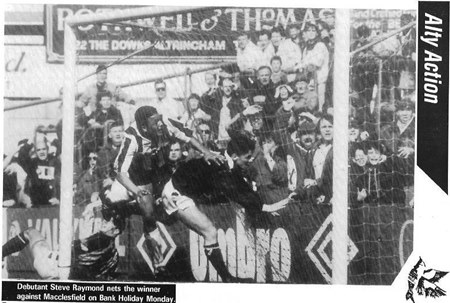 Meanwhile, the Macc team included three former Alty players: Elfyn Edwards; John Timmons and Mike Hardman, together with right full back George Shepherd, who would join the Robins at the advent of the calamitous 1996/97 GMVC season, and left full back Stuart Bimson, who would subsequently return to Moss Lane in order to act as assistant manager to Ken McKenna during that ill-fated 2010/11 Blue Square Bet Premier campaign. Oh, and the Silkmen's current manager John Askey wore the No. 9 shirt on that day, too.

Whilst the ensuing 90 minutes could hardly be portrayed as embodying the essence of a classic derby, the Robins' battling performance culminated in a merited success via a 62nd-minute goal on his Alty debut from Steve Raymond, who had graduated from the Robins' Youth Team. A right-wing cross to the far post at the Chequers End reached the cult figure of the Robins' gargantuan centre forward Ian Tunnacliffe and the mighty Tunna's close range header duly thudded against the crossbar, whereupon the opportunist Raymond pounced swiftly to head home the rebound on the bounce.

This vital goal crowned a hectic few days for the young striker, who had celebrated his 18th birthday on the preceding Thursday; played a game on the Saturday; scored a hat-trick for the Alty Youth Team in their 8-3 triumph over Wilmslow Albion on the Sunday and then received Gerry Quinn's summons to deputise for the injured Carl Dyson against the Silkmen on Easter Monday.

The Robins would proceed to remain undefeated for the remainder of the season, registering four wins in their closing five fixtures (including a notable 2-0 victory at the eventual Champions, Martin O'Neill's Wycombe Wanderers, in front of a gate of 6,284), an accomplishment which enabled them to ascend to a creditable 10th-spot finish. In the process, they would also play an instrumental role in Macc's eventual escape from demotion.

Notwithstanding overcoming Witton Albion 1-0 at the Moss Rose in their penultimate fixture of the season, Macc still had to achieve either a win or a draw at Wycombe Wanderers in their final game, whilst also hoping that results elsewhere went in their favour. A goal from substitute Roy Green secured an invaluable 1-0 win for the Silkmen at Adams Park and their GMVC future now depended upon events which were beyond their control.

Lo and behold, Alty obligingly popped up to give their long-standing enemy the necessary helping hand towards the preservation of Macc's GMVC status by means of their own final day 5-2 trouncing of struggling Farnborough Town at Cherrywood Road, which condemned the Hampshire club to relegation alongside Boston United.

May I remind the Macc players and supporters that this aforementioned precedent comprises a hugely magnanimous act of kindness by the Robins, which has, as yet, not been reciprocated. Frankly, it's high time that the Silkmen did the honourable thing by returning the compliment and this evening represents an ideal opportunity to do so, thank you very much.

Alas, out of the total of eight league fixtures conducted between the two traditional adversaries since that 1992/93 season, six have concluded in victory for the men in blue. The Robins' sole conquest amidst that largely miserable period transpired on Tuesday, 30th January 1996 by means of an immensely gratifying 3-2 GMVC victory on an icy Moss Rose pitch, courtesy of goals from Stuart Terry (two penalties) and Dean Pritchard.

Anyhow, back to the current season. Macc have been doing far too well for my liking and presently occupy ninth position in the league table, a dozen points better off than Alty, whilst having scored two more goals and conceded 20 fewer goals than the 23rd-placed Robins.

Well, I can barely bring myself to mention Alty's godawful performance in last Saturday's mortifyingly intolerable 4-0 debacle at home to Welling United. All I will say is that at least a perfect chance for almost instant atonement beckons for the Robins' management and players this evening. It's all exceedingly straightforward, chaps: just go ahead and vanquish Macc.

I'll finish with a fleeting reference or two to New Order, a band who have strong Macclesfield connections, and state that I have true faith that the only thing that's going to be blue this week is, indeed, Monday.