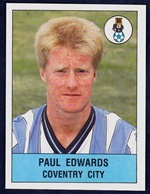 Paul Edwards (right) started as a junior with local side, Tranmere Rovers, after which he joined Marine FC, where he came through the youth team and ended up winning the supporters' Player of the Year award three times in four seasons.

In his time there he appeared in two League Cup-finals at Maine Road, (one of them on the winning side), and was also in Marine's Liverpool Senior Cup winning side and contested the FA Trophy semi-final with Northwich Victoria in 83/84, (a season in which Marine played 78 games in all competitions!).

After four relatively successful seasons with Marine, Paul then stepped up to Conference level and joined new Altrincham manager, John Williams at Altrincham in the 1986 close season. Primarily a defender, Paul made his debut at left back in the season’s opening fixture, a 1-1 home draw with Bath City. He played one more game at left back before being moved into midfield, to accommodate Peter Densmore at left back and spent most of the remainder of the season playing in a midfield role. The season wasn’t particularly impressive, (after Wembley the previous season) as Altrincham were rebuilding but they did make the final of the Cheshire Senior Cup, only to lose 3-0 to Runcorn.

The following season Paul was selected regularly at left back and played in Crewe’s 3rd Round FA Cup tie with Chelsea, which Chelsea won after a replay. His performances impressed scouts from several league clubs, finally leading to Crewe Alexandra making him an offer to play in the Football League, at the relatively late age of 24. He signed in late January 1988 and made his debut on the left side of midfield in March in a 2-0 defeat at Scarborough, only being switched to left back towards the end of the season.

In all, he played 9+ 2 Fourth Division games. For the 1988/89 season he was a near ever-present at left back as Crewe gained promotion to the Third Division, with Paul playing in 53 of a possible 57 league and cup games. The following season was more of the same and Paul’s performances in the Third Division were attracting scouts from First and Second Division clubs which led to a £350,000 offer from First Division Coventry City, which was accepted in March 1990.

He made his debut as a substitute in a 1-4 defeat at home to Sheffield Wednesday/ His full debut followed two weeks later in a 3-0 away defeat at Manchester United. For season 90/91 Paul was a regular pick at left back into January the following year but, with Coventry struggling and trying other players in his position, they eventually signed former England left back, Kenny Sansom and Paul wasn’t to see the first team again until the final game of the season, when he came on for Sansom in a 6-1 defeat at Arsenal.

Although he started the following season in the first team, interest was shown from Second Division Wolverhampton Wanderers who signed Paul for £100,000 in August 1992 and he went to finish the season as a first team regular. For 93/94 he dropped out of the reckoning in terms of first team football but was transferred to West Bromwich Albion in January 1994 for £80,000 and played out the remainder of the season.

The 95/96 season gave him only sporadic first team opportunities and he was eventually loaned out to Third Division Bury, where he played four games at left back. Unable to break back into the first team, and with age against him, Paul joined Conference side Hednesford for a short spell and then Paget Rangers, where he was eventually appointed joint manager in October 1999, only to leave in July 2000 due to extreme financial difficulties at the club. It was not a bad career for someone who only turned professional at the age of 24. It is believed that Paul still lives and works in the Birmingham area.