"THIS IS A GREAT CLUB", SAYS LEE

John Edwards, Altrincham FC's joint Press Officer, writes that "Lee Sinnott saluted an outstanding team performance and called for more of the same after seeing Altrincham hit the ground running on their eagerly-awaited return to action on Tuesday night.

An eye-catching 7-1 scoreline completed a hat-trick of wins over Boston United this season and reinforced Alty’s hold on fifth place, at the start of what Sinnott considers a critical phase of their Blue Square Bet North campaign.

‘I could not have wished for much better than that, after all the disruption caused by waterlogging and then snow over the past few weeks,’ said the Alty manager. ‘You can do all the training you like, but you are always a little wary going into a game after a lay-off.

‘I tried to simplify it for the players by telling them to show hunger and trust that would transform itself into energy and then into quality. They ticked all three boxes, and I was delighted. Take the goals out of the equation, and there was some outstanding football from us.

‘The scoreline speaks for itself, in terms of where this rates compared to other wins in my time here. We had two 6-1s last season, against Boston and Colwyn Bay, and winning 1-0 at Brackley earlier this season was quite something, as was the wonderful stuff we played at Burton Albion in the FA Cup.

‘But this was a really pleasing result and performance, right up there with anything else we’ve done.

‘It was so important to start back with three points, because we are entering a very busy month or so, where everyone will be jostling for position. With games coming thick and fast, you can get left behind, if you are not careful. Lose one or two, and you can be blown away, so it is essential we keep it going.’ 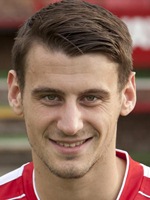 In-form midfielder Simon Richman (left) matched Damian Reeves's two-goal contribution with a double of his own and celebrated by signing an extended contract until the end of next season.

‘He is not the first young player we have signed up, and it is an indication of the strategy I am trying to put in place, with the help of Grahame Rowley and Andrew Shaw,’ added Sinnott. ‘When I first walked into the job, I made it clear I wanted to build something new, and that was always going to be dependent on not only having young talent but securing it for the good of the club.

‘We will look after our young players, because we don’t want to lose them come the end of the season, when it tends to become a free-for-all at this level. It can be a little bit here-today-gone-tomorrow in this division, but we are looking to put building blocks in place and do what is best for our young players and the club. That is paramount.

‘I knew Simon at Port Vale, and I’m pleased that, after the problems he had with injury and illness last season, people can now see where he is coming from. He does a wonderful job for us, with the energy he puts in. Any team aiming to be successful needs energy, and that is taking nothing away from what he can do on the ball.

Boston had a man sent off near the end, and Sinnott saw clear signs of his players sticking together and standing up for each other, whenever the going got tough physically.

‘The ruckus was too far away for me to be sure about who was doing what to who,’ he said. ‘You don’t want to see anyone sent off, but equally you have to stand your corner. You have got to earn the right to play your football. If teams think they can bully you out of it, they will, so it was good to see the players standing up for each other.

‘The last thing you want is players wading in with fisticuffs, but keeping people at bay is a different matter. There’s nothing wrong with that.

‘What did annoy me a bit was a naughty tackle on Duncan Watmore a bit before the fracas. Players can get frustrated in games, when things are going against them, but there is no excuse for frustration transcending into the darker side of things. It could easily have caused more harm than it actually did, and that is what angered me.’

There was a word of gratitude from the Alty boss for the volunteers who cleared the school training pitch in Wythenshawe to enable an invaluable training session and practice match to take place.

‘This is a great club with some great people attached to it,’ he said. ‘I am extremely grateful to all those who put in so much time and effort to make the surface playable. It’s no easy task clearing a pitch of snow and ice. I did it when I was younger, and I know it’s a good work-out, to say the least. I’m full of admiration for those who helped out, particularly as it could have been a wasted effort, if the snow had come down again. They weren’t to know, but it didn’t seem to make any difference. They just got on with it, and I thought that was great.’

Alty will again be without injured James Lawrie at home to Gloucester City on Saturday but hope Danny Hall (above right)recovers from a cut on his foot".

Alternatively, you can find text updates on this site's Matchday Updates page, at the link below

You can follow the match via the following quick links...